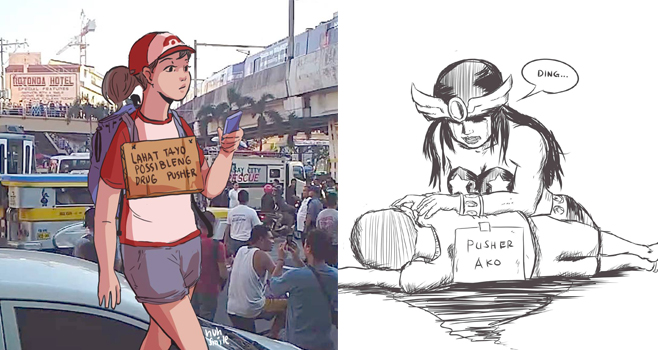 (SPOT.ph) At last count, 136 drug dealers were killed in just 11 days, and some were said to be "murdered" by "unidentified hitmen." They lie dead on the roads with faces covered in duct tape and bodies with cardboard signs that either say "Pusher ako" or "Drug lord ako." As the numbers increase, more and more concerned citizens become alarmed at the summary executions. Even the youth is calling on the government and human rights groups to stop the extrajudicial killings before things get out of hand.

Hope Swann, professor at De La Salle University, is credited for starting the #CardboardJustice movement. Like the people allegedly involved in the drug trade who have been killed, she wore a sign that says "We could all be pushers" and posted it on her social media pages.

It wasn't long before digital artists took to Photoshop and drawing tablets to create contributions to the movement. Israel Bobadilla came up with a funny but true illustration.

Rob Cham made a GIF where the cardboard sign bears the phrase "wag tularan" after identifications like "kurakot," "pusher," "nanay," "tatay," and even "basta."

The Ambula page posted an illustration of a whole family making their own cardboard signs.

War On Drugs Rodrigo Duterte Artists Drugs Metro Manila News
Your Guide to Thriving in This Strange New World
Staying
In? What to watch, what to eat, and where to shop from home
OR
Heading
Out? What you need to know to stay safe when heading out