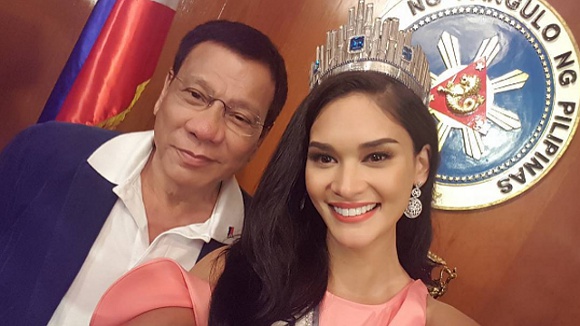 According to a report from CNN Philippines, reigning Miss Universe Pia Wurtzbach stopped by the Palace today, July 19, in the hopes that the Philippines will host this year's pageant. Department of Tourism Secretary Wanda Teo said that the president has "has already approved the plan in principle." So far, no formal announcements from Wurtzbach, the Palace, or the Miss Universe Organization have been released.

HBO has confirmed that Game of Thrones' seventh season will consist of only seven episodes and is slated for a premiere in "summer 2017" (likely June to August in the Philippines). The statement comes after earlier reports that claimed filming was delayed due to weather. The later airdate means that Season 7 will likely miss the eligibility window for the 2017 Emmys, so they might have to wait until 2018 to sweep all the nominations again.

Love is dead! According to a report from PEOPLE magazine, Diane Kruger and Joshua Jackson have ended their 10-year relationship. The ex-couple's representative didn't give any breakup details, but said the two "remain friends."

A fourth Star Trek film has already been announced, and it looks like it will feature a familiar face: Chris Hemsworth. Before the Australian actor was famously known for playing Thor, he played Captain Kirk's (Chris Pine) dad in the first film. He will reportedly be given more screentime in the next installment.

Malabon Zoo owner Manny Tangco recently introduced the zoo's two-month old Bengal tiger cubs, named Duterte and Leni. He shared that the cubs have some similar traits as their namesakes "Duterte is very frank. He sees things as it is and he also takes good care of his sibling, while Leni is very gentle but tends to get rough when she has had enough." The two were spawned by the zoo's resident tigers Ninoy and Cory.

Sandiganbayan on Tuesday, July 19, issued a hold departure order against former Vice President Jejomar Binay Sr. and dismissed Makati Mayor Jejomar Erwin Binay Jr. This is in connection with the criminal cases over the anomalous construction of the P2.28-billion parking building in Makati. The two cannot leave the country unless there is approval from the anti-graft court.

The Ateneo community mourns the death of a beloved Math teacher named Emmanuel Jose Pavia who was shot by a "hired" gunman on Monday night, July 18, while walking towards his house in Barangay Barangka, Marikina City. He sustained two gunshot wounds, one in the head and one in his back. Investigators are looking into the possibility that Pavia's being an anti-drug advocate may have something to do with the murder.

The Office of the Ombudsman ordered filing of graft charges against former chair of the Metropolitan Manila Development Authority Bayani Fernando on Tuesday morning, July 19. This is for the anomalous use of P24.2-million Metro Manila Film Fest Funds during his term from 2002 to 2009.

9. 10 Amazing Spots for Bird-Watching in the Philippines

The Philippines is a gold mine of birding spots. We round up some locations where you can get a good view. Grab your binoculars and get ready for an adventure.

If there's one color that would look great on anyone, it's the classic and versatile black! From chic shades to must-have heels, we round up 10 stylish pieces you can easily rock.

Metro Manila News Manila Politics Features Showbiz News 10thingsyoumissed
Your Guide to Thriving in This Strange New World
Staying
In? What to watch, what to eat, and where to shop from home
OR
Heading
Out? What you need to know to stay safe when heading out