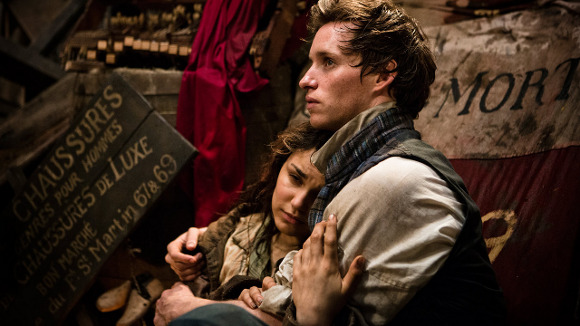 1. Les Misérables is headed to TV

The beloved classic by Victor Hugo is getting a big-budget TV adaptation! The Weinstein Co. and the BBC are teaming up to produce a six-episode miniseries that will reportedly "delve into the many layers of Hugo's story." Meanwhile, Harvey Weinstein said that the series will be "completely different" from the film adaptation, saying it "will find contemporary relevance to what's going on in the world today."

After a photo of Vilma Santos and Jessy Mendiola went viral, TV host Luis Manzano told PEP.ph that it was because his mother had invited the latter to dinner. "My mom just invited us for dinner to talk and check up on me and also to meet and check up on Jessy regarding all the unwarranted bashing going her way," he said. Mendiola was earlier accused of stealing Manzano from Angel Locsin; she has denied the rumors.

On Friday, the Palace announced that a set of President Duterte-themed stickers will be released on messaging app Viber after Monday's State of the Nation Address. Communications Secretary Martin Andanar explained, "Part of our role is to reach out directly to the people which Viber allows us to do." Some of the stickers feature Duterte's campaign slogans.

The world's first Pokemon Go dating service, dubbed PokeDates, has been launched. You sign up on the PokeDates website (where you fill in a few qualities you're looking for in a future partner), and fill out a schedule to say when you usually go hunting for Pokemon. The site then pairs up applicants, sending them a time and location, and they start playing.

5. Humpback whale gets too close to paddleboarder

Flutist Viviana Guzman always brings her instrument even while paddleboarding in California’s Half Moon Bay. “I felt maybe [the whales] would like it,” she said. Turned out that the huge mammals love it so much, one humpback whale leaped out of the water right next to her on July 16.

Department of Health Sec. Paulyn Ubial said on Thursday, July 21 that they're looking into having the two-week drug rehabilitation program included in PhilHealth's coverage. "Unfortunately, hindi kakayanin 'yong prolonged residential services which can take six to 12 months. So 'yong ipapasok natin sa Philhealth is acute phase, which lasts up to two weeks," she said. They have yet to discuss the exact coverage costs with the national health insurance program.

Presidential Communications Secretary Martin Andanar confirmed on Friday, July 22, that President Rodrigo Duterte will sign the executive order on the Freedom of Information bill before he delivers his first State of the Nation Address on July 25. Passing the bill, which aims to make government documents more available to the public, was one of the president's campaign promises.

Passengers of the Philippine National Railways were forced to squeeze themselves inside the train during a heavy downpour on Thursday night, July 21. Some of the personnel even had to pull the people out just to get the doors to close. Francis Charles T. Brines captured the incident on video, which has gotten more than 300,000 views as of writing. "Napakamura ng pamasahe, P10, kaya parang buong Pilipinas ang nasa Buendia Station," Brines said.

Celebrity-turned-politician Sen. Vicente "Tito" Sotto continues to entertain (or often, these days, enrage) us because of his commentaries on issues of national interest. There are so many, but we limited this list of Sotto-isms to only 10.

10. 10 Restaurants to Try in Poblacion

It might seem underrated, but Poblacion is steadily becoming a must-visit for foodies in Manila. From hidden gems to new finds, we round up 10 restaurants you should check out.

10thingsyoumissed News Showbiz Features Politics Manila Metro Manila News
Your Guide to Thriving in This Strange New World
Staying
In? What to watch, what to eat, and where to shop from home
OR
Heading
Out? What you need to know to stay safe when heading out