The last blush of the afterglow of victory 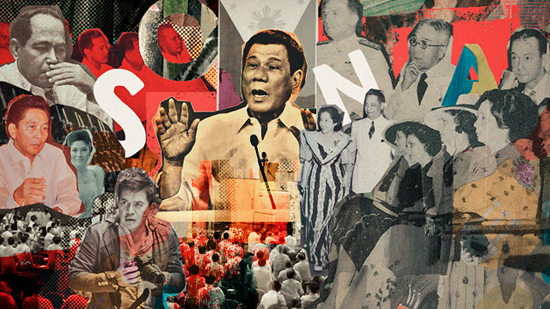 (SPOT.ph)
It will not, of course, be the first time a noted director has taken charge of a president’s State of the Nation Address. That distinction belongs to the late Zeneida Amador, who handled the optics for President Gloria Macapagal-Arroyo’s first SONA in 2001. But whatever Brilliante Mendoza manages on this, the fourth Monday of July, when the Constitution commands Congress to convene for its regular session, and for the president of the Philippines to address it in joint session to report on the state of the nation.

Even if commanded to do so by the Constitution, the president makes his or her appearance strictly upon the invitation of the legislature. Since the time of kings—and nearly all modern legislatures owe their practices and traditions to those days, hence the medieval mace carried around as part of the Congressional regalia—parliaments and congresses have been jealous of their independence which is why, in our case, military honors are rendered on the front steps of the Batasan: the premises of a legislature are strictly off-limits to the army and police, controlled by the executive. This principle is still (somewhat hazily) insisted upon by Congress, which is why during the last Congress, you had those portly honor guards dressed in Comic Opera uniforms lining the center aisle in the House Session Hall—they’re security guards, really, but dressed like extras in Cinderella.

For any new incumbent, the first SONA is the last blush in the afterglow of victory. Energy is still high; public opinion, in a land where more Filipinos always remember having voted for the winner than actually did so on election day, is still riding high. If the Inaugural Address is a statement of aspirations, then the first SONA is the action plan catalog. And here, every president has free rein to make his or her mark on one of the oldest traditions (begun in November, 1935) of our government.

But before one innovates, the tedious work of actually crafting the SONA has to take place.

Written by committee, vetted by advisors, styled by wordsmiths, a SONA eventually ends up on the lap of the president, who has absolute freedom in terms of organization and style, to say what he or she pleases, in the manner he or she wants, using whatever props he (or she) and their advisors deem fit. This includes what the Americans call a skutnik—after Lenny Skutnik, a congressional employee who’d jumped into the Potomac River to save a passenger after a plane crash. Ronald Reagan invited him to be a member of the audience in his 1982 State of the Union Address, and the use of audience members to praise or pander to, has been a feature of official rhetoric ever since. It allows a picture to paint a thousand words: The Courageous Mother, the Honest Public Servant, the Nut-brown Toiling Farmer, the Valorous Cop, the Happy Indigenous Person, etc.

A president will toss out drafts, and, depending on temperament, attention span, and speaking style, order the redrafting, dictate, or pencil-in, changes, all the while being bombarded with helpful “suggestions” (lobbying, really) to put this in, take that out, mention this, highlight that, downplay something else. This can be a mind-numbing or explosive process; it then leads to marrying words with visuals—the skutniks, or Power Points, even videos—that are required by having a short attention-span public and media all dominated by TV. More than the Inaugural Address, the SONA is where presidents must confront that many-tentacled monster, government officialese, the endless parade of acronyms and catchy code words that are the private language of those in power.

Code-switching—from serious, lofty purple English prose, to folksy, intimate, winding Filipino sentences—has been part and parcel of officialese, too, including the token use of other Philippine languages for effect. This is because in a SONA, there are multiple audiences. I count four of them: legislators and local leaders, who preen at being mentioned and who are in ecstasy over promises of public works; the bureaucracy, which takes its cue as to the appropriate level of devotion and the right buzz words to adorn its memoranda, from the SONA; diplomats, who justify their jobs by pointing out what nations were mentioned (and which ones ignored) and which of their efforts to cultivate or frustrate policies failed or succeeded; and the public, which really doesn’t watch or listen to the whole thing, since it is held mid- to late-afternoon when everybody is at work, but relies on the media to filter the messages, and other onlookers who weigh in, from professional protesters to civil society anxious to see if it successfully managed to lobby for mention in the SONA (this is why the weeks preceeding the SONA have various organized groups, from OFWs to teachers to taxi drivers demanding to be mentioned and have their five seconds of fame).

The historian Mina Roces once proposed that to understand our politics requires understanding palakasan—who is malakas, who is mahina; and the SONA puts on full-throated display, who matters to a president.

Will it be the provincial barons? Which ones? Because every president, bar none, soon develops a hatred for the National Capitol Region. Will it be specific members of the cabinet? Again, who? It dictates who needs to be approached, and who can be comfortably ignored (regardless of portfolio) within the official family. Will it be the public? Which suggests Congress and officialdom are on notice to be on their best behavior—or else. More often than not, presidents carefully juggle all these, in the hope of leaving every sector and political group feeling hopeful of favors to come.

But there is one thing all SONAs suffer from, and that is, most of the speech will be about things the public doesn’t quite care about, or understand. The result? Counting applause and commenting on ternos becomes an addiction. Counting applause seems to date to the Garcia administration which gave primacy to the party machine, and has been a feature of SONA reckoning ever since. Gown-spotting seems to have had its first glimmerings in the First Quarter Storm era when women hardly wore ternos anymore and hippies considered such dresses a sign of decadence; with the first post-EDSA SONA in 1987, a Congress still unaccustomed to being more than a canned applause factory for presidents (such was the effect of Marcos) preferred to strut and preen, having forgotten the meeting-of-equals traditions of the Third Republic, and our celebrity culture has itself created a couture political culture as a result.

There is another thing born during the SONA process, but it always remains the unloved spawn of the exercise—the SONA Technical Report. This is the fine print, the assortment of facts meant to buttress the speech. Produced with great effort, hardly anyone—even within government—makes much use of it, which is a pity. It usually comes out on, or soon after, SONA day, and, like the other government product, the proposed budget, which comes out a month after the SONA, its importance is matched by the utter indifference of those outside official circles.

This SONA of beginnings—for Rodrigo Roa Duterte’s first SONA, like that of all his predecessors, will define the actual manner in which he governs—also marks the resumption of a stalled evolution. Consider that 1961 was the last year we had a non-Luzon resident as president (namely Carlos P. Garcia, who stepped down on December 30 of that year)—and incidentally, that year was the time a Mindanawon achieved the highest position in government—namely Vice-President Emmanuel Pelaez who took office on that date. And it has been 70 years–when Sergio Osmeña stepped down in May, 1946—since we have had a Cebuano president. So President Duterte, in his first SONA, does so as the representative of a trend that has long been delayed, on one part, and as the vanguard of a movement larger than himself—as we will see when mounts the rostrum today, and fleshes out the details of some of the promises and ideas that brought him to the presidency.

Brilliante Mendoza promises a mesmerizing show. The new president himself has proven himself a Master Showman. Here, however, is the truly innovative thing about what we will witness today: it is just one speech, for one audience, and will have to be matched with other speeches to other audiences. Just a few weeks ago, the new president made a perfectly fine inaugural address, which soothed anxious businessmen and diplomats and pleased the middle and upper classes with its 1950s style rhetoric; that evening, the new president made a rip-roarin’ speech in Tondo that those audiences simply didn’t watch. The speeches were polar opposites of each other, in style and content. This is something new, and we have still to find out what it says about the new executive and we, the people.

For more on what SONAs are, and other information, see my Facebook Note: Sources on, and Accounts of, Past SONAs.

Duterte Sona State Of The Nation Address
Your Guide to Thriving in This Strange New World
Staying
In? What to watch, what to eat, and where to shop from home
OR
Heading
Out? What you need to know to stay safe when heading out