Duterte’s Treason to the Political Class 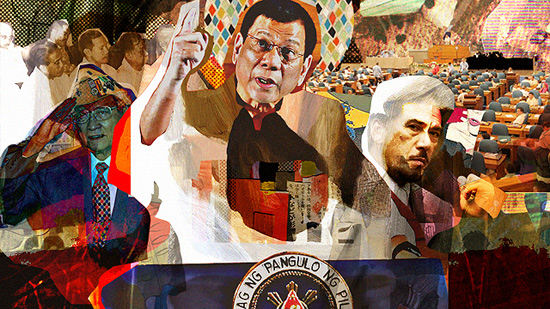 (SPOT.ph) When President Duterte mounted the rostrum in the session hall of the Batasang Pambansa, he did so as the tenth president who was an alumnus of the House—an institution he has bluntly been contemptuous of in the past. As he once put it, “I’ve been in the Congress and after the flag ceremony punta na ako sa canteen, then out…I’d go to the mall, naglalakad-lakad ako, tapos magdadaldal, wala namang kakwenta-kwenta…kayo na diyan, uwi na ako.” A lifetime as a prosecutor (only the third president we’ve had who was once a prosecutor) and a local government chief executive (only the third mayor-president, only the fifth, if you include presidents who’d been governor); does this to you. You develop zero tolerance for talk, talk, talk and fraternity horse-trading (as a mayor, you facilitate horse-trading; you are not one of the traders, that is, if you’re an old-fashioned bossman which the President is).

But I am getting ahead of myself. Before he put the Congress in its place, he departed from his prepared text and said some truly interesting things about the kind of government setup we should have. As the first president who is a lawyer since 1986, and as a local executive who has had to deal with two power bases—the presidency and the cabinet, and Congress, both of which are not only fickle but addicted to reinventing the wheel every six years—you can be sure he has some pretty fixed ideas about what needs fixing—and how. My hunch is, presidents and local chief executives are more likely to see eye-to-eye than local chief executives and the year-round gabfest known as Congress.

What he wants is a demarcation of authority—presidents can and should do lots of things, primarily foreign affairs and national security and broader economic policy, but leave to the locals what the locals do best—attend to the specific needs of their constituents instead of forcing cookie-cutter solutions on everything from Manila. He has been around the block long enough, however, to know that the three-year gabfest that is each Congress is a wasted resource, if only because as presidents periodically raiding Congress for cabinet appointments shows, legislators with their political standing can be useful in filling the bureaucracy. Legislators want to be ministers, and this ambition frankly motivated a chunk of the coalition that put him in power.

And so he opened the portion on political change in the SONA with a recognition of these facts. But to the sweeteners he added a shocker—the retention of the presidency. “You know my advice to you,” he said, “is maintain a federal system, a parliament,” (so far, so good) “but be sure to have a president. Huwag…Hindi na ako niyan. I’m disqualified and by that time I would longer be here. But, I can commit today to the Republic of the Philippines and its people: If you hurry up the federal system of government and you can submit it to the Filipino people by the fourth, fifth year, proseso ‘yan e. You call for a referendum and after that call for a presidential election, I will go. Sibat na ako. But you just have a president.” Shocker!

After all if people are generally in awe over both the assumption to power, and enormous political capital, of President Duterte—how do you justify that precisely the possibilities his office represents, should be extinguished through if not the abolition, then the neutering, of the office he now holds? If he is, as his supporters (and quite a few of his critics) point out, the fulfillment of the hitherto-untapped potential of the presidency, then he would be the last person to propose turning the chief executive into a decorative capon. One can rightly argue we need more presidents cast in the traditional mode of the strongman.

Which is why, to me, next came the killer punch: “You copy the France system,” he said. “Huwag mo hayaan ‘yong puro na parliament. Delikado iyon. It takes time even for the…Iyong kagaya ng England noon. There was this bomb, double deck. It took them time really. There’s no one apparatus for a commander-in-chief down.”  The President’s desire (for the French Model) and warning (pure parliamentary government is “delikado”) was a stab directly into the heart of parliamentarists like Fidel V. Ramos who have a specific model in mind: Malaysia. The dream has burned bright since FVR and Lakas-UNCD proposed a shift to the parliamentary system to create an enduring, monolithic party on the model of UNMO, free of national, direct elections for the presidency (regardless of whether the Malaysian model has been increasingly challenged over the past decade).

But then, lest anyone forget he has been an accomplished politician, he tempered his remarks. This is a significant insight into his style, which is to say it is one part straight-from-the-shoulder tempered by humorous concessions to his audience. He said, “You can have a president you can elect. Maybe Tito Sotto would be the lucky guy at that time.” An acknowledgement that vox populi, like the Dei, moves in mysterious ways. Which led him to quip, well, if you elect someone like him “O, ‘di, limitahan mo lang. Ceremonial powers. Power to dissolve, power to accept the resolution or whatever, mandating you this, do that, or ceremonial powers except ‘yong in times of need, if there’s a demand for action. You must have a president.” And the last sweetener, “Wala na ako niyan. I said if you can give me that document, I will urge you to conduct a…to order, call for an election the following day, following week.”

What followed next was interesting. After the National Security Council meeting, the Speaker had a huddle in the Palace with other grand political pooh-bas and then gleefully announced that he’d convinced the president not to go through with a Constitutional Convention, because it would be expensive. According to him, the president agreed. But the presidential spokesperson was less categorical about it, merely saying it “was discussed as a possibility considering the prohibitive cost should they begin the process soon.”

What the Speaker perhaps did not point out was that a Constitutional Convention would also be uncontrollable. Which means not only might the final product not be what congressmen want; it might take longer than they want. Consider Alvarez’s timetable, for example: ratification of the new charter in the 2019 midterms, after which government would shift to being a transitional one, pending election of a parliament in 2021.

What would this accomplish? It would nip the prospects of 12 senatorial candidates in the bud (why go through competing in a national election, when a future senate might be regional or even cease to exist?), and throw the traditional process for vetting the prospects of possible presidential candidates out the window (whoever is No. 1 in the senate mid-terms is often a leading contender for the presidency three years later; no senatorial buzz, no brewing excitement for a nationally-elected president to come). Shooting potential national candidates in the kneecaps is just the sort of thing aspiring prime ministers need, since they can set aside public opinion and concentrate on the votes that will matter—their fellow lawmakers.

A convention, on the other hand, might suffer from that great political inconvenience, an independent mind. The result might be not what the House of Representatives wants, but what the President has in mind. Then where would the parliamentarists be?

President Duterte has often pointed out his father was governor of the undivided province of Davao, a vast area. We forget Marcos had attempted the first step in a federal project, reversing the gerrymandering of the previous three decades by establishing regions as the basis of representation and a political unit in the Republic. His effort failed, and he himself began to make it meaningless: for example, confronted with a war in Mindanao, he gerrymandered the island to create pocket fiefdoms for the warlords he needed as allies. Knowing full well that a major motive for parliamentary government is to liberate elected politicians from the iron curtain that divided the executive with its control from departments, from legislators who had precious little to do except engage in petty extortion either in the budget or the Commission on Appointments—seasonal activities, at best—one can see that the President arguably sees the forest from the trees. That what he, as an executive, sees as a national solution is far from what many of his own allies want.

Politics Duterte Sona News
Your Guide to Thriving in This Strange New World
Staying
In? What to watch, what to eat, and where to shop from home
OR
Heading
Out? What you need to know to stay safe when heading out