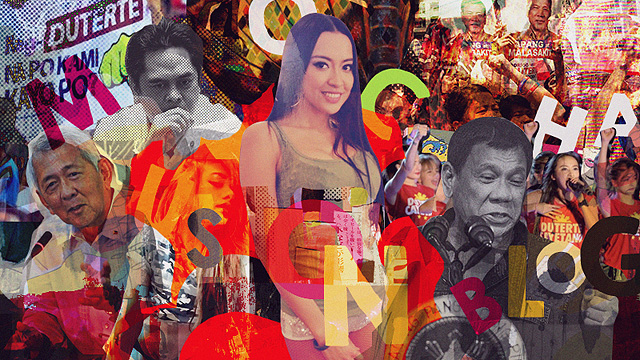 ...or how the Duterte administration found its voice in Mocha Uson. 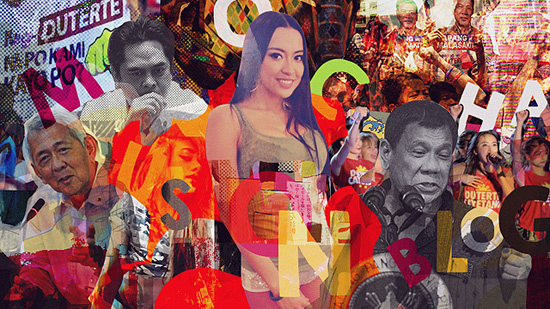 (SPOT.ph) In a country that prides itself as the “social media capital of the world,” the Duterte administration found its voice in the Mocha Uson Blog Facebook page.

First things first: the Mocha Uson Blog is not a blog, it’s a Facebook page. Like many people, Mocha uses the term “blog” loosely: “the people who write on the Internet.” She proudly proclaims herself to be “DDS”—a “Duterte Die-Hard Supporter”—with the symbolic fist being an important motif in her posts. Her voice was never meant for the prototypical Twitterati: you don’t see much in the way of product placements and reviews (save for a “food trip” series with her mom). She does not aspire for the Anglicized eloquence that many “serious” bloggers or political commentators use to validate themselves. Mocha keeps it real: the rough-around-the-edges Tagalog relatable to so many Filipinos. The hints of showbiz catchphrases reveal her origins as someone who was once on the fringes of celebrity. Her glaring disdain for the elites and oligarchs is evident, dripping from every post that praises President Duterte.

It’s also real, in terms of the result. The Mocha Uson Blog has almost four million likes: effectively 25% of the 16 million voters who assured Duterte of the presidency. Almost 500,000 people talk about the Mocha Uson Blog on a daily basis: a number that most other local brands on social media can only aspire for.

The lechers who lust after the salacious dance numbers of the Mocha Girls have all but drowned in long, engaging comment threads. Mocha is no longer the gyrating entertainer who shares occasional tips about sexual performance, but has become a force in local political commentary. After all, she bags interviews with Duterte cabinet members—even President Duterte himself. Much to the chagrin of some journalists who not only have to deal with the President’s adversarial treatment of the media, but get “outscooped” by Mocha Uson. Her interview segments are well-produced, all aspiring for the glint and polish of what you would see on ANC or CNN.

Mocha has become so influential that for a very short while, she almost became the “social media consultant” of the Bureau of Customs. The “thought leaders” and “influencers” of the country’s rather insular digital community were up in arms over the prospective appointment: what does she know? Perhaps even sexist: why is this “sexy dancer” considered for a job that requires a lot of professional experience?

Yet it is a criticism that falls on a rather obvious blind spot.

Some of her harshest critics would point to the exaggerations and pretenses that she created and amplified to sow “fear” and “distrust.” Yet at the core, Mocha’s politics are articulated in the same, simple way as most other Filipinos would theirs. The Mocha Uson Blog is a conversation on frustration, and how a new patron can change things for the better. The voice of Duterte is, for all intents, the voice of Mocha.

President Duterte is not the silver-tongued orator who would take to a lectern with speeches that border on the literary. The contextual acrobatics with guys like Perfecto Yasay and Martin Andanar point to the same conclusion: that this administration needs someone to articulate “change” better. The hot-blooded rhetoric that catapulted the likes of Duterte to the presidency doesn’t have a place in the everyday process of running government. Yet the measured and tempered responses to social and political problems have, somehow, been done without: what we have are banalities like the fist emoji, and the platitudes of “political will.” Those hackneyed things are easier to understand than nuances. Perhaps, even easier to understand than Truths (if we are to wax poetic about it). Especially with people who have been alienated from and by politics for so long.

Think of it this way: if digital is Rome, and Duterte is the corpse of Caesar on the floor of the Senate, the old guard of political commentary would be Brutus. They would be the eloquent ones, talking above the citizens about high abstractions like “honor” and “ambition” and perhaps even “ambition.” Mocha is the persuasive Mark Antony, carrying on a conversation with the citizens, appealing to their emotions. Not that one is better than the other, but that Mocha knows what can make at least 16 million Filipinos—four million of them on digital—tick.

In the days of Estrada, Arroyo, and Aquino, political commentary was based around nuances (or things that appear to be nuances). Politics have become unnecessarily complicated, and out of the grasp of common Filipinos who are tired of—and confused by—the rigor of political processes. In her own way, Mocha turns that whole thing on its head. For her—and for her most avid followers—Duterte is the solution. Duterte has the answers, and the nuances are best left to the people as to what they can contribute to “change.” Unlike news outfits, Mocha would summarize statements, articles, and other items (albeit from spurious sources) and put the Duterte agenda forward. Her ka-DDS would clap, cheer, and engage with Mocha. Because at long last, at least to some degree, the complex and complicated Philippine political process is “understood.”

For some people—which include the “thought leaders” and “influencers” that Mocha Uson has displaced—social media should act as a sort of “Fifth Estate.” It watches the watchers: critical of society, critical of government, and critical of the media. Through the Mocha Uson Blog, Mocha showed that the Internet can be a blank slate. Social media can be a voice for things other than dissent. Facebook can carry a person to the presidency. And if you stare long enough into the great abyss that is the Duterte political platform—one riddled with dead bodies and curses and “out-of-context” statements—you can become one with it.