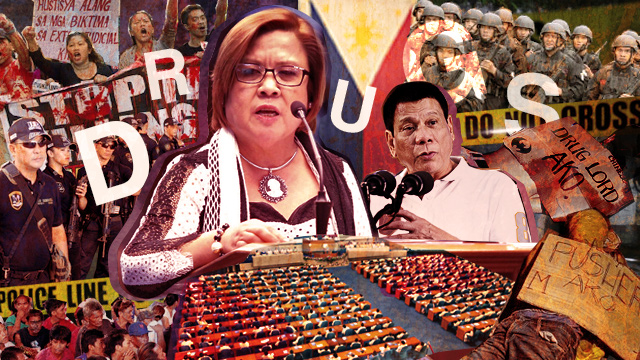 There's more than one way to skin a cat. 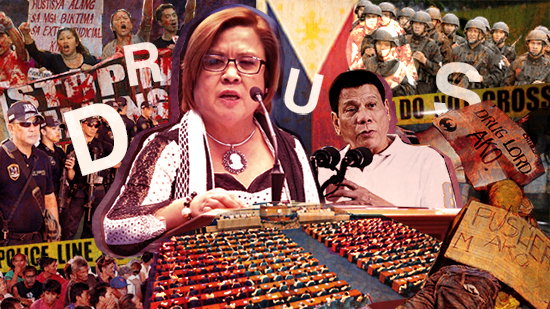 (SPOT.ph) There is a three-cornered fight going on, and it involves the president, the House of Representatives, and Sen. Leila De Lima. Everyone knows that the president and the senator are at loggerheads. He says she is a coddler of drug lords; she says he has taken local death squads and gone national. The president has raised the senator’s personal life, and promises to unveil a matrix to prove his accusations. She has conducted an investigation in aid of legislation, on alleged extra-judicial killings.

But why is the House of Representatives getting into the act?

In late July, when he was still waiting to be formally elected Speaker of the House, Rep. Pantaleon Alvarez said he would file a motion in the House to investigate Sen. Leila De Lima over her handling of the New Bilibid Prison in Muntinlupa during her stint as Secretary of Justice. Back then, she caught drug lords living in luxury in prison. This, Alvarez said, was all for show, and he wanted to get to the bottom of things (at the same time he rejected proposals for the House to investigate alleged extra-judicial killings, saying Congress has no prosecutorial powers and no changes to legislation could possibly arise from an investigation). In the end, the Speaker and Reps. Karlo Nograles of Davao City and Raneo Abu of Batangas became co-authors of the resolution. For Nograles, what he wants to know is how drugs were manufactured in Bilibid and which personalities are connected. Abu, for his part, wants to dig deeper into raids conducted in Bilibid in which a shabu laboratory, high-powered firearms, improvised weapons and luxury items were discovered.

Last Tuesday, the remaining eight oppositionists in the House (grandly called—by itself—the “legitimate” minority bloc while the rival minority bloc seems to be more the company union of the supermajority) held a press conference saying, as Rep. Edcel Lagman put it, an “invitation” to Sen. De Lima to attend the hearing was a violation of the principle of inter-parliamentary courtesy between the two chambers of Congress. Rep. Raul Daza added that the rules of the House declare it unparliamentary to make “derogatory remarks against the Senate” and to “refer to senators by name by way of personal criticisms.”

Earlier, Reps. Abu and Nograles had said that all they could do was issue an invitation—but that De Lima, based on parliamentary courtesy, could not be compelled to attend. For her part, in a privilege speech in the Senate on August 2, De Lima said she would not attend the House hearing—not on the principle of inter-parliamentary courtesy, which she said was properly Senate President Aquilino Pimentel III’s defense to make on behalf of a colleague and the institution of the Senate, in the face of “this blatant break of tradition”—rather, she said, her defense was her record, “before this demolition job was launched against me both in social media and by the Solicitor-General.”

So is De Lima being (a not-so) Little Miss Manners? Are opponents of the “invitation” by the House who are House members themselves, fussing over frou-frou matters like politeness, which is getting in the way of a vital, urgent inquiry in the public interest? What is the point of all this etiquette?

Based the American model, we divide our government into doers, talkers, and thinkers: the President is the Action Man (or Woman), but too much action can be dangerous, so you need people who pass laws, without which you cannot have a basis for action—and who will talk things through in Congress, not just once, but twice (House and Senate) before any law is passed; and you need thinkers—the Courts—to ponder on whether Doers and Talkers are subscribing to the ultimate law, the Constitution, which is the contract between we, the people, and everyone earning a public salary, whether they be doers, talkers, or thinkers or their subordinates. It is a tedious and confrontational process by design.

From the English we have the principle that the Doer—in their history, the King—has something that the Talkers—in their history, the House of Commons—does not: an army. That is why, to this day, at the State Opening of Parliament, the official tasked with summoning the House of Commons has the door ceremoniously slammed in his face: Parliament attends of its own free will and not by force. This is why, when the President goes to deliver his SONA, the armed forces stays outside the premises of Congress, and officers attend only as invited guests, because the first thing Doers do, when they decide they don’t like impertinent questions or debate, is to padlock parliament or congress.

What applies between independent institutions—and theoretically, though the practice may be different, Congress is independent of the Palace—also applies within an institution if, as our Congress is, it’s composed of two institutions, namely the House of Representatives and the Senate. They form one institution but represent different constituencies. The House represents specific local districts, and because of this, more basic, representation, things like proposals for new taxes can only come from the House, for example. The Senate, on the other hand, is unique in the world because it represents the nation as a whole: like presidents, senators are elected by the entire electorate, which is why it is often the place from which future presidents emerge.

The Constitution as the operations manual for our government, specifies that the House and the Senate adopt their own rules; that they, and only they, can discipline their own members—which means the House cannot interfere in the rules and membership of the Senate, and vice versa. There is a pragmatic logic to this. There are far more members of the House, who could be whipped up into a mob, to lynch either the Senate as a whole, or individual senators. There are very few Senators and they could easily conspire as a cabal to persecute the House or its members. Fundamental to this principle is respect for the electorate that chooses representatives and senators; it would be improper for a nationally elected senator to meddle in the affairs of a specific district of a city or province, as it would be for a specific city or province to try to meddle in the internal affairs of a body whose members have been elected by the entire nation. Not to mention another basic reality: the House has always, without exception, been under Palace control; the Senate, on the other hand, by design is meant to have the stature to deal, on a more equal level, with the presidency.

This is the meaning, then, of inter-parliamentary courtesy. Congressmen and senators are nothing without the constituencies they represent; to engage in meddling—for whatever lofty reason (and no politician has ever been short of lofty reasons to excuse breaking the rules)—strikes at the relationship between those who elected that legislator and the institution they belong to.

This does not mean that if anyone harbors suspicions against a legislator, that person ought to be let off without scrutiny. Far from it. It only means that there are proper ways and means to do this. Whether congressman or senator, for example, if you want to ask a member of the cabinet questions, the president must give his consent, because the president (including his alter egos, the cabinet members), is the co-equal of Congress. Even when a president is put on trial, the House acts as prosecutor but it is the senate, nationally elected and thus representing the same constituency as the president, who can sit in judgment to decide whether or not to cut short a president’s term. There is nothing to stop a concerned citizen to ask the Senate to convene its Committee on Ethics, or to form a Committee of he Whole or what have you, to look into the questions it wants asked concerning Sen. De Lima. Then she would have no choice but to answer. The House can hold all the hearings it wants and if enough witnesses make convincing revelations the House can submit these to the Senate which would be hard-pressed not to make an inquiry according to its own rules and processes.

Otherwise the House risks establishing precedents that are, in the long-term, harmful to its own independence. All legislative bodies function only because rules exist, with those rules clarified and made practical, by precedents—how the rules have been applied in the past, as a guide for the present and future. To throw this all away for short-term political satisfaction is a guarantee than when a challenge to the entire institution comes from outside, as legislatures always experience sooner or later, then the Talkers will have their last armor stripped away by themselves—the precedents and rules and practices that gained themselves the independence to be able to talk, in the first place, without being fearful of losing life or limb to the caprices of kings, presidents, or generals.