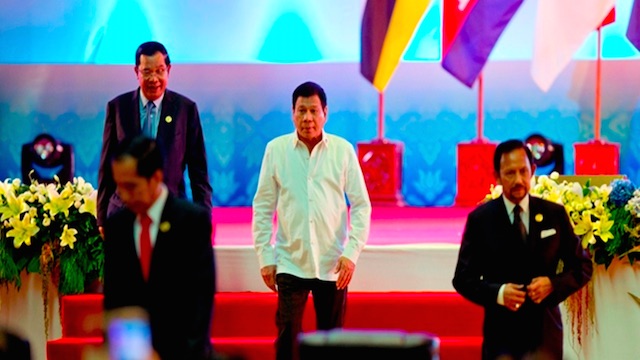 President Duterte's debut on the world stage revealed as much about us, the people, as it did about him as president.

(SPOT.ph) Winston Churchill defined diplomacy as “the art of telling people to go to hell in such a way that they ask for directions.” It requires tact, which Harry S. Truman described as “the ability to step on a man's toes without messing up the shine on his shoes.” The highest form of diplomacy is that which is conducted between and among heads of state; and all the elaborate courtesies that exasperate the impatient and ill-informed, is a means to an end: the conducting of the business of the state without having to be distracted by possible ill-feelings caused by petty matters of style, which, if ignored, gets in the way of substantive discussions.

When the President reacted with irritation to a reporter’s question (what if other leaders bring up human rights) and said, “You must be respectful. Do not just throw questions and statements. Putang-ina, mumurahin kita diyan sa forum na ‘yan. Huwag mo akong ganunin. Tell that to everybody,” a lot of energy—and column inches—have been used up on parsing whether something was lost in translation: did he mean Obama is an SOB or did he exclaim, SOB, then expound on his point? It ignores what was really the challenge that could not be ignored: “mumurahin kita diyan sa forum na iyan.”

Expletives aside, then, President Duterte’s preemptive missile strike was aimed at the world at large, but also included President Obama who was the one widely expected to bring up human rights in in his scheduled meeting with our president. This is what was at the heart of Obama’s later reaction, "I always want to make sure if I'm having a meeting that it's actually productive… What I've instructed my team to do is to talk to their Philippine counterparts to find out, is this in fact a time where we can have some constructive, productive conversations."

The question of parsing our grammar to figure out if the cursing was aimed at life, the universe and everything, or someone in particular, was covered by Obama describing our president as “colorful;” the preemptive rhetorical missile strike on the other hand was covered by asking whether a meeting would be productive or not. Apparently not, as we all know.

President Duterte would later tell the Filipino community in Jakarta that the two leaders did have a brief encounter prior to the leaders’ dinner: “Kaya sinabi ko dun sa holding room, ‘President Obama, I’m President Duterte. I never made that statement, you can check it out.’ [Obama said] ‘My men will talk to you.’ Sabi ko, ‘Okay.” Obama’s version goes like this: “I did shake hands with President Duterte last night. It was not a long interaction, and what I indicated to him is that my team should be meeting with his and determine how we can move forward on a whole range of issues.''

But wait, there’s more. Those hoping for more verbal missile strikes were disappointed when the president, feeling under the weather, skipped the leaders’ interactions with their American and Indian counterparts. But at the 11th East Asia Summit, between leaders of ASEAN and others, the President launched another preemptive missile strike in the form of a PowerPoint presentation. In his Jakarta Filipino Community speech, this is the president’s version of what happened, and why:

“PRRD: Six hundred thousand Muslims, six thousand were murdered. They were just buried in a common pit. Nag-ungkay lang, tapos iyong mga sundalo pinapatungan po iyong dibdib ng babae na nakahubad. This is human rights. What do you intend to do? Do not tell me that that’s water under the bridge. Human right violation, whether committed by Moses or Abraham, is still a violation of human rights. When was this philosophy about the human dignity and human right evolved? Now, or during this time? Tumahimik siya. I was—kasi ako, handa na ako—I was waiting for Obama to respond. Eh abogado ito, abogado tayo, pareho man tayo abogado. Sasabihin daw...Tsino? Wala. And that was the only encounter.”

The result was interesting. Agence France-Press quoted an Indonesian delegate who said that the president "showed a picture of the killings of American soldiers in the past and the President said: 'This is my ancestor[s that] they killed. Why now we are talking about human rights.'" The delegate went on to describe the atmosphere as quiet and shocked."

Here’s what I think is the missing context to that report.

As a general rule, the remarks—or “interventions”—of leaders in these summits (Whether ASEAN or APEC) are not published (see the East Asia Summit page for example). Instead, a pretty vanilla opening statement by the host might be published, and a closing statement (a communiqué) as a kind of gotta-please-everybody-and-make-everyone-seem-one-happy-family statement comes out. The reason these statements aren’t published is to allow the leaders interacting with each other to speak their minds and bring out—and resolve—issues without causing the kind of waves that unduly complicate matters between governments and regions.

So when diplomats spoke to the press, they may have done so anonymously, but it is safe to consider the possibility they did so as authorized leaks to communicate the attitudes of their governments. They were not pleased.

The president’s story is consistent with his previous ones: when it comes to human rights, the best defense is a good offense, and that takes the form of a preemptive strike by invoking the record of other countries. That is fair and just as far as it goes.

Even Henry Kissinger once wrote the following, in 1957: “No significant conclusions are possible in the study of foreign affairs—the study of states as units—without an awareness of the historical context… The memory of states is the test of truth of their policy. The more elementary the experience, the more profound its impact on a nation’s interpretation of the present in light of the past… Who is to quarrel with a people’s interpretation of its past? It is its only means of facing the future, and what ‘really’ happened is often less important than what is thought to have happened… [All states] consider themselves as expressions of historical forces. It is not the equilibrium as an end that concerns them… but as a means towards realizing their historical aspirations.”

But we do not operate in isolation; and while many applauded if not the style, then the substance of the president—he was firm about our sovereignty, insistent on being accorded respect as a head of state, fierce when it comes to recalling the sins of foreigners against our country and our people in the past—the same could be said for the other ASEAN leaders there. Vietnam, Laos and Cambodia know a thing or two about being at the receiving end of American “benevolence,” particularly Laos, the host: the Americans dropped more bombs on that country than they did on Germany and Japan combined, in World War II.

Yet these countries, in pursuit of their own national interests, have pursued a reconciliatory foreign policy with the United States. Surely they do not—and will never—forget the sins of America in the past. Neither should we; but what we should not forget is that Laos itself was engaged in moving its relationship with the USA forward; that ASEAN, in general, is concerned with China’s activities in the Spratleys and other places; and that in the main, ASEAN wants peace and quiet and not fireworks at a time when international tensions are riding high and the global economy is not particularly healthy.

In that context the president’s preemptive approach to questions on human rights, with blustering, cursing, and bringing up history as the warheads for his launched verbal attacks, are domestic crowd-pleasers for some but internationally irresponsible behavior for others. The place to lecture the President of the United States would have been in a meeting with him—except it was precisely this possibility that our president wanted to forestall. Counteracting the raising of the topic by two of the president’s pet peeves—the Secretary-General of the UN and Obama—put our president’s domestic agenda ahead of the ASEAN community’s common agenda, and that is what the diplomats from our neighbors were communicating when they leaked to the wire service of France.

In ASEAN, the chairmanship of the organization passes from year to year, from one country to another, based on the alphabetical list, in English, of member states. The country that’s chairman for a particular year, gets to host the annual gathering of leaders. So when 2017 rolls around, it will be interesting to see—what lessons has Team Philippines learned? And what attitudes will our neighbors be bringing to the table when they arrive as our guests? At least two will probably arrive not as happy campers—since the president described them, in his Jakarta speech, in the following terms: “Cambodia; Cambodia is a satellite of China. Laos is a—kani-kanila iyan eh, satellite.”

Which raises an interesting point about the ties between nations in an interdependent world: if we have toed the American line too long in the opinion of some, would toeing the Chinese line be helpful counterbalance? Well, it takes two to tango.

Consider that a Chinese academic, Li Jinming, professor of international relations at the Research School of Southeast Asian Studies at Xiamen University, told Bloomberg, “It could hardly be perceived as an opportunity because Duterte often talks incoherently and is temperamentally unstable… He could say one thing today and utter the entire opposite tomorrow." If diplomats can anonymously leak to express their governments’ points of view, academics from China can also express opinions to telegraph Beijing’s frame of mind.

Most interesting of all is how too many of we, the people, missed out on what was really going on. On one hand, too many Filipino observers were reacting from a colonial-minded point of view—upset that a Filipino, any Filipino, much more a president—would dare call out the Great North American Nation. Others, on the other hand, reacted from an ironically colonially-oriented sense of nationalism—delighted at the lashing out of the president, as a kind of antidote to the smooth colorless statements of the past (they should read Illusions of Influence: The Political Economy of United States-Philippines Relations, 1942-1960 which rather conclusively argues we bamboozle the Americans far more than they have bamboozled us).

Lost in the whole blur of headlines was this central question: aside from dodging inconvenient questions about human rights—something, by the way, every nation has an interest in, precisely because it applies universally—and being selective in the use of past atrocities (you will never hear the president denounce the destruction of Jolo during the reign of Ferdinand Marcos, as one observer pointed out), what national interest of the Philippines was promoted?Perhaps a kind of splendid isolation that would make North Koreans proud.