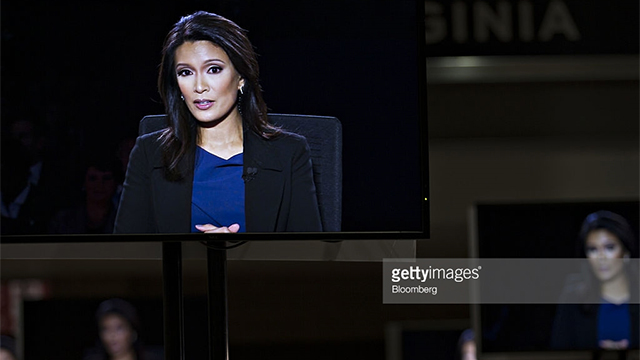 She's been dubbed the real winner of the U.S. vice-presidential debate.

The real winner in all these is almost always the moderator who patiently reminds the candidates of the topic on the table and has to cut off-tangent remarks short. When Kaine and Pence faced off, at the center of it all was CBS News anchor Elaine Quijano whose bold line was: "Gentlemen, the people at home cannot understand either one of you when you speak over each other. I would please ask you to wait until the other is finished." She's the first ever Asian-American woman and one of the youngest to moderate a national debate.

Forty-two-year-old Quijano did an impressive job and, best of all, she's proudly Pinay! She revealed in an interview with Filipinas Magazine in 2010 that her mother is from Batangas and her father is from Davao City. "I understand Tagalog, I can probably speak a little bit of it, but konti lang. I'm a little bit sad about that because I definitely would have loved to have that ability to just have conversations in Tagalog. Truth be told, I probably could if I was dropped to the Philippines, I probably could," the Illinois-born reporter quipped.

She graduated from the University of Illinois with a degree in journalism in 1995 and quickly made her way into the world of reporting. She first worked for WCIA-TV in Illinois, then for WFTS-TV in Tampa, and then for CNN Newssource. The 9/11 terrorist attacks and U.S. invasion of Iraq were just some of the beats she covered before being promoted as White House correspondent in 2006. She is now the daytime anchor at CBS News where she's been since 2010.

We wonder how she'll fare on covering President Rodrigo Duterte and his "oblique deflection" remarks that need to be interpreted with "creative imagination."

Elaine Quijano Debate Filipina Filipino
Your Guide to Thriving in This Strange New World
Staying
In? What to watch, what to eat, and where to shop from home
OR
Heading
Out? What you need to know to stay safe when heading out