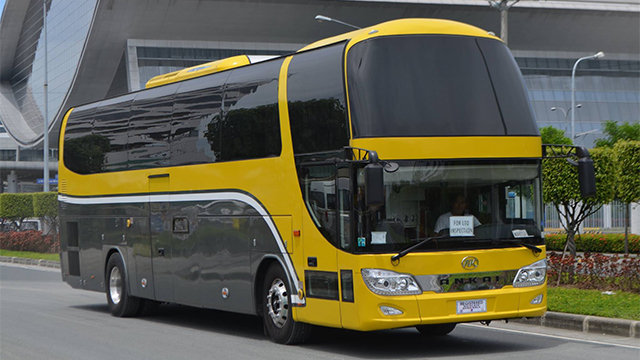 Karaoke on the bus? Why not.

(SPOT.ph) With Metro Manila's perennial traffic problem, commuting from Quezon City to Makati can take two hours on bad days, not to mention the price surge on Uber or standing-room-only bus travel. But it looks like there's a bit of help coming your way, with the deployment of 14 brand-new double decker buses under the Point-to-Point Bus Service today, October 12. The additional vehicles will take the Trinoma-Glorietta 5 route, with operations running 24/7. Bus fare is P55 with 50% discount on weekends.

The Point-to-Point Bus Service (P2P) was launched by the Department of Transportation and Communications in early 2016. It started as a holiday project in partnership with Froehlich Tours, one of the providers of the P2P fleet, under a special permit issued by the Land Transportation Franchising and Regulatory Board. But the original January 6 deadline was extended to January 31, until more routes were added in April. Right now, there are six routes that cater to passengers: Greenbelt 1 to Alabang Town Center, Robinsons Galleria to Park Square, SM North to SM Megamall, Trinoma to Glorietta 5, Eton Centris to Glorietta 5, and Robinsons Novaliches to Park Square. Buses depart on a fixed schedule and travel directly from the pick-up to drop-off points, cutting travel time to less than half.

Aside from showcasing the new double decker buses, Froehlich Tours also featured their VIP Skyliner units as well as the PWD Double Decker units. The customized VIP buses have reclining sleeper seats with foot rests and a lounge with flat screen TV monitors, a cooler, and even a comfort room. The commuter life doesn't look so bad now, huh?

Trinoma To Glorietta Traffic Commute Travel P2p Buses News Metro Manila News
Your Guide to Thriving in This Strange New World
Staying
In? What to watch, what to eat, and where to shop from home
OR
Heading
Out? What you need to know to stay safe when heading out