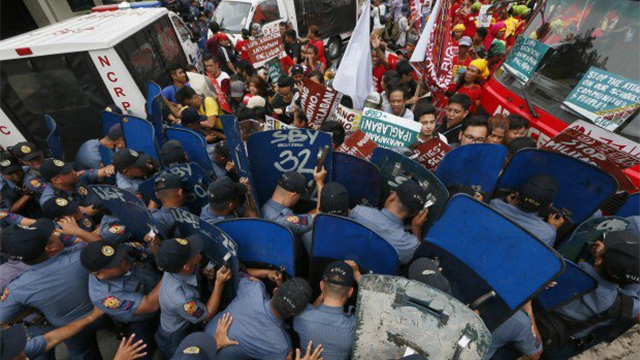 10 Posts That Accurately Express Our Feelings About the Violent Dispersal at the U.S. Embassy

Who do these policemen work for, again?

(SPOT.ph) Members of several Filipino indigenous communities assembled in front of the U.S. Embassy along Roxas Boulevard on October 19 to support President Rodrigo Duterte's independent foreign policy. They made the headlines, both local and international, after a violent dispersal ensued in which a number of rallyists were beaten up by the Manila Police District and several others, run over by a police mobile. Prior to this, the officers also hosed with water protesters in front of Camp Aguinaldo on Tuesday, October 18.

The protesters are part of the Lakbayan ng Pambansang Minorya (a.k.a. Lakbayan) which kicked off in Mindanao on October 8. About 3,000 people from various indigenous communities marched from Southern Philippines to Metro Manila to rally for their right to self-determination and protest against getting ejected from their ancestral lands, the exploitation of their homes due to large-scale mining, and paramilitary operations that render their communities unsafe.

Members of the national minority group are camped out at the University of the Philippines – Diliman campus where volunteers provided the “Lakbayanis” with shelter, food, blankets, dry clothes, and other necessities. They’ll be staying there until October 28 while they visit various government agencies in the capital to further bring national attention to their plight.

Meanwhile, Twitter users expressed their disgust at the police brutality that happened.

you only need to be alive.

So Duterte can curse Obama, but civilians cannot protest in front of the US Embassy?

After the bloody dispersal in Manila, well, I think the Philippine National Police just mocked its tagline 'to serve and protect'.

While protestors outside the US Embassy were literally ran over by the police, our President repeats his F-Obama speech in Beijing. Whut?

"Why can't they protest peacefully"
oh like how the military peacefully massacre their kind and destroy their home?

Metro Manila News Rally Protest Lumad Indigenous People Manila Police District
Your Guide to Thriving in This Strange New World
Staying
In? What to watch, what to eat, and where to shop from home
OR
Heading
Out? What you need to know to stay safe when heading out