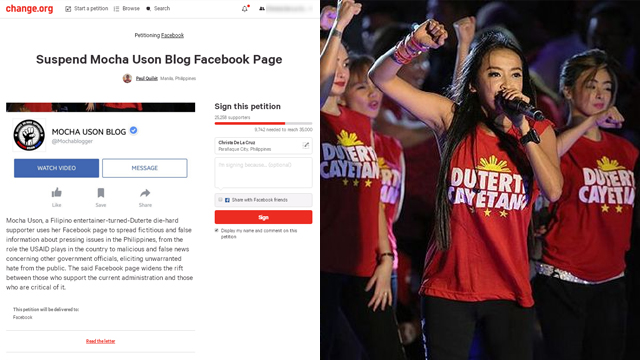 Probably not the best idea. 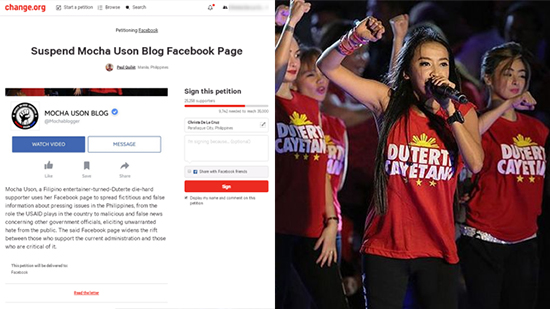 (SPOT.ph) A petition titled Suspend Mocha Uson Blog Facebook Page started making its rounds online on October 23 after a certain Paul Quilét posted it in Change.org. "Mocha Uson, a Filipino entertainer-turned-Duterte die-hard supporter uses her Facebook page to spread fictitious and false information about pressing issues in the Philippines, from the role the USAID plays in the country to malicious and false news concerning other government officials, eliciting unwarranted hate from the public. The said Facebook page widens the rift between those who support the current administration and those who are critical of it," the entry read.

In defense, Quilet clarified that the petition "aims not to curtail anyone's right to free speech." He explained that the "liberties listed in the Bill of Rights are not absolute" and gave the case of Gonzales and Cabigao vs. COMELEC (April 18, 1969) as an example. "Freedom of expression is not an absolute. It would be too much to insist that at all times and under all circumstances it should remain unfettered and unrestrained. There are other societal values that press for recognition," the Supreme Court decision read.

Meanwhile, Facebook and Twitter users have mixed reactions on the issue. Some are fed up with Uson’s posts, while others—despite being against the blogger’s "alarming" use of social media—would think twice about denying her the right to free speech.

I have to think about the Mocha Uson petition.

When we insist on free speech and freedom of information, and yet we put up a petition to close down #MochaUson's page. Hay naku #Pilipinas.

: I'm on the fence about getting Mocha Uson Blog suspended TBH. On one hand, I don't like her or her views. On the other hand, legal pa rin.

"I disapprove of what you say, but I will defend to the death your right to say it." Evelyn Hall

*Looking at you MOCHA USON BLOG*

The Change.org petition has almost 25,000 signatures as of writing and is meant to be delivered to Facebook.

Petition Change Mocha Uson Duterte Metro Manila News
Your Guide to Thriving in This Strange New World
Staying
In? What to watch, what to eat, and where to shop from home
OR
Heading
Out? What you need to know to stay safe when heading out