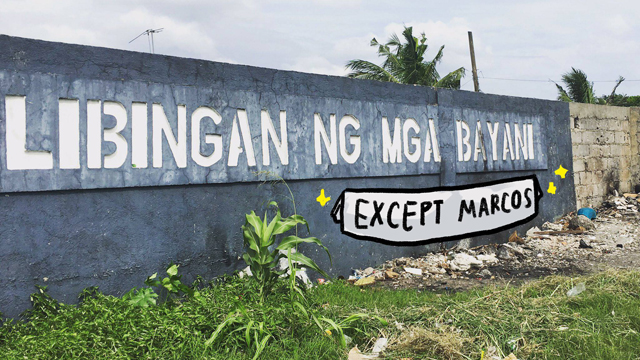 Here are a few suggestions from the Internet.

(SPOT.ph) In case you haven't heard, President Rodrigo Duterte ordered the burial of the remains of former President Ferdinand Marcos at the Libingan ng mga Bayani in August, and the Supreme Court approved it on Tuesday, November 8. "The Court found that the President committed no grave abuse of discretion in ordering that the remains of former President Ferdinand E. Marcos be buried in the Libingan ng mga Bayani (LNMB) because this was done in the exercise of his mandate under Article VII, section 17 of the 1987 Constitution to ensure the faithful execution of all laws and there is no law that prohibits the burial of the Marcos remains at the LNMB," the summary of the decision read.

Libingan ng mga Bayani was first known as the Republic Memorial Cemetery when it was established in 1947. It was built to pay tribute to the fallen Filipino soldiers who bravely fought during World War II. Republic Act 289, which was signed by former President Elpidio Quirino, states that the cemetery is a "national pantheon for presidents of the Philippines, national heroes, and patriots of the country" who should serve as "inspiration and emulation of this generation and of generations still unborn." The cemetery got its current name in 1954 under the administration of former President Ramon Magsaysay.

Justice Teresita J. Leonardo-de Castro of the Supreme Court argued that the name of the cemetery is creating a lot of controversy and that the body may find it "very difficult to determine who are heroes." Former Bayan Muna Rep. Neri Colmenares, one of the petitioners against Marcos' burial at LNMB, zeroed in on the original purpose of the cemetery—"inspiration and emulation," adding that "the victims will long be forgotten, but their tormentor is now in a place where he is called worthy of esteem."

In frustration, people have suggested new names for the heroes' cemetery.

I don't want to see him being included as a hero.

LIBINGAN WILL CHANGE ITS NAME TO "LIBINGAN NG MGA BAYANI AT TULISAN"--! https://t.co/4rKwCQ4fD4

Metro Manila News Libingan Ng Mga Bayani Martial Law Marcos Ferdinand Marcos
Your Guide to Thriving in This Strange New World
Staying
In? What to watch, what to eat, and where to shop from home
OR
Heading
Out? What you need to know to stay safe when heading out