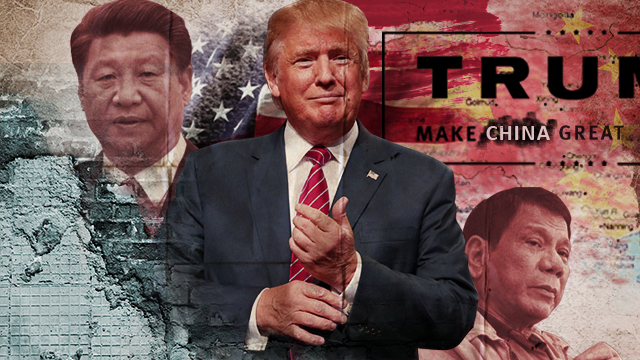 We Don’t Understand The Donald. Sad!

But there are clues if you look hard enough.

(SPOT.ph) The little anyone knows about Trump comes from The Donald himself: He likes to win. He is a winner. He is Master of the Art of the Deal. He likes to win, not just big, but huge. He will win, so bigly, and so often, people will get tired of all the wins. But since it will be the best winning ever, it will be beautiful. Amazing.

Part of this self-congratulatory package is that he is set in his ways, he doesn’t like to read, he only trusts family, he has a temper, he can be mean, and he launches preemptive strikes against people he doesn’t like on Twitter. He’s not just orange, he’s ornery.

The question is whether the Philippines or Filipinos are on his dislike list.

Actually, it’s not like the Philippines is anywhere on Trump’s radar except for his mentioning the country once during the campaign—as a terrorist-infested country. No surprise then, that for our part, official Filipino reaction to The Donald’s electoral college victory has been not just to lavish him with praise, and appoint a realty developer who’d licensed (that is: paid for) the Trump name for a building project as special envoy to Washington (even ahead of the election), or backtrack and resume the previously-cancelled purchase of rifles from America for the police. It includes saying we’ll be a good boy in any forthcoming war on ISIS, too. In other words: Do everything possible to not just avoid pissing off the guy before he even takes office, but get on his good side, somehow, right now.

All these are placeholders for if and when official American attention finally shifts to the Philippines. By all accounts the presidential transition in America is confused, chaotic, and controversial, and along the way many other nations are ahead of us in line.

In the meantime, it will be some time to come before we—or the rest of the world—find out just how much of Trump’s Contract with the American Voter, with its pledge to either opt out of, or renegotiate, trade deals, junk the TPP, and end the Offshoring Act (and bring back manufacturing jobs to America) is going to happen (in the meantime, pre-Trump trends are coming home to roost).

Even Mighty China is in the same boat. China experts, from the people who man the Sinica podcast to Henry Kissinger, seem to have arrived at the consensus that Trump is exactly the sort of leader that drives Chinese officials nuts. The reason is that the Chinese are thorough. They dislike unpredictability and mysteries. They both need, and are set on overtaking, the United States. As much as possible, they would like to do to America what the proverbial scientist likes to do to the frog: boil it so gradually it never realizes it’s being cooked. Policy wonks seem to agree that while the Chinese are not fans of Hillary Clinton, her long experience made her—and by extension, her policies—predictable, thus manageable; so even if they expected her to be tougher than Obama, with Trump they really have no idea whether he means what he says or will do what he vowed in the campaign.

If the Philippine reaction to the Donald’s win was tail-wagging, China’s has been blind man’s bluff. One part bravura (“We thought we would rule the world in 20 years. Now it’s going to be in January,” in the words of one Chinese businessman), one part tough-guy posturing in state media (state-run Global Media: “If such a person can be president, there is something wrong with the existing political order”), one part condescension from talking heads (Yu Yongding, economist at the Chinese Academy of Social Sciences, Beijing: “After he becomes president, there’ll be advisers at his side to explain to him what the exchange rate is, what capital flows are, what macroeconomic policy is.”), and one part olive branch (President Xi, in his congratulatory message to Trump, was reported to have cordially hoped they would be “developing long-term healthy and stable Sino-U.S. relations is in the fundamental interests of the peoples of both countries.”). The problem is, China state media said Xi not only sent a message, but talked on the phone with Trump; but when he was interviewed by the Wall Street Journal, The Donald said he’d talked to many world leaders—except China’s. So China changed tack and thundered, it would cut sales of iPhones and U.S. cars if “naïve” Trump pursues trade war. Sad!

So if self-assured China is so obviously at a loss over Orange being the new Black, what more us? But there are certain things we can start figuring out. What, if any, are The Donald’s plan for our neck of the woods? Two articles can help us figure it out. Both are by advisors of Trump.

The first is by James Woolsey Jr., who was CIA chief under Bill Clinton, is described as “a senior adviser on national security, defense and intelligence”: Under Donald Trump, the U.S. will accept China’s rise—as long as it doesn’t challenge the status quo.

Essentially Woolsey is waving a bunch of carrots in Beijing’s direction: Trumpworld will have no TPP (great news for China); Trumpworld, however, is interested in signing on to the AIIB (the infrastructure bank China has largely funded) and finds the Silk Road scheme of President Xi interesting and potentially lucrative; most important of all, is the closing paragraph of his piece, which goes like this: “I can therefore see the emergence of a grand bargain in which the U.S. accepts China’s political and social structure and commits not to disrupt it in any way in exchange for China’s commitment not to challenge the status quo in Asia. It may not be a spoken agreement but a tacit understanding that guides the relations in the years to come.”

In other words: The past posturing of American administrations on human rights will be a thing of the past. Whether involving civil society, Tibet, Hong Kong, Muslim ethnic minorities, none of these will be our business nor will we make the dominance of the Chinese Communist Party any of our business. We can work together, earn and profit together, but in return you have to recognize we are the other leading Pacific power and don’t disrupt our alliances and interests in the region.

The second is by Alexander Gray and Peter Navarro (both described as “policy advisors to the Trump campaign,” but it’s Navarro who has real clout) : Donald Trump’s Peace Through Strength Vision for the Asia-Pacific. To borrow one of Trump’s own phrases, it basically condemns the rebalancing to Asia of the Obama years as a “low energy” pivot. The result was Chinese aggressiveness towards Japan, South Korea, and in Southeast Asia.

This led to formerly solid American allies like the Philippines straying away from Washington (according to the article, “Few in Washington remember that the Obama administration pointedly refused to intervene in 2012 when China blatantly violated a diplomatic agreement brokered by Sec. Clinton’s right-hand man in the region, Kurt Campbell; Beijing shredded that agreement by brazenly seizing Scarborough Shoal from the Philippines after agreeing to stand down. Washington’s utter failure to uphold its obligations to a longtime, pivotal ally during one of its most humiliating crises has no doubt contributed to Philippine President Rodrigo Duterte’s low opinion of American security guarantees...”)

Trumpworld, in contrast, will junk disadvantageous deals like TPP (so here’s a baby carrot for China) while investing in a big, beautiful, Great White Fleet (a big, big stick). By lifting spending limits on the Pentagon, the U.S. Navy will grow from 274 to 350 ships. The Army and Air Force, too, would grow again because they can spend again.

That expanded navy will, of course, engage in aggressive freedom of navigation exercises: effectively reinforcing the American shield protecting not just Taiwan, but driving American allies in Southeast Asia back into the American sphere of influence.

As an aside—think of the economic bonuses, too, that this building program will create, not just for American industry but, one can infer, for Asian powers like Japan and South Korea. These two, as rich countries, will have to pay more and spend more on their own defense and to contribute to joint defense; as Newsweek suggests, one beneficiary of additional military spending in South Korea would be Daewoo, a longtime Trump Organization business partner in a very real and decades-long sense. So even as Trump promises to make Japan and South Korea assume more of the financial burden for regional defense, he also quickly reassured South Korea that The Donald has their back.

Woolsey brings extensive experience to the table, and in TrumpWorld one could view him as the good cop—moderate, conciliatory, pragmatic, to Navarro’s bad, bad cop—whether in liberal The New Yorker or in arch-conservative Forbes, Navarro’s being the sole economist on Trump’s team and someone whose works Trump has actually read, and enjoyed, and quoted, seems to be spooking a lot of people.

The Donald of course has other ideas, too. What’s uncertain is how fully-formed they are or how serious they are. But there is a kind of rough, instinctive, logic to some of those ideas. He offers, for example, a face-saving way out for Russia, with a partnership on Russia’s terms in Syria against ISIS, a recognition of Russian interests in the Crimea, and a pointed warning to NATO for it to take up more of the financial burden of the organization.

We shouldn’t forget that the only leader on earth who seems to think China and Russia are aligned is President Duterte. Everyone else recognizes the historic rivalry, even hatred, between China and Russia, and that the Asia deal Trump’s advisors have floated in public, could just as easily be accompanied by a tolerant view of Russia firming up its own security concerns about China.

In Trumpworld, Japan, South Korea, and Australia would do more heavy lifting in the region with the U.S. Navy as the point of the spear, poking and jabbing every time China shows expansionist or aggressive tendencies. The Indian Ocean would be India’s, to counter China’s creeping expansion, there; and Russia, for its part, would be mending fences with Japan and thus, countering China not only along its land borders in Siberia, but at sea, as well. This would mean in turn, that countries that thought they could have wiggle room with a weakening, distracted, America, might be in for an old-fashioned surprise.

For us, two opportunities seem to exist. To be a reliable ally in fighting ISIS, and to keep Subic and other places open to the U.S. Navy as it goes about its business. In exchange, things like democracy and human rights won’t be raised. Win-win? Or a deal you can’t refuse!

Clinton Duterte International News Essay President Elections Usa Donald Trump
Your Guide to Thriving in This Strange New World
Staying
In? What to watch, what to eat, and where to shop from home
OR
Heading
Out? What you need to know to stay safe when heading out