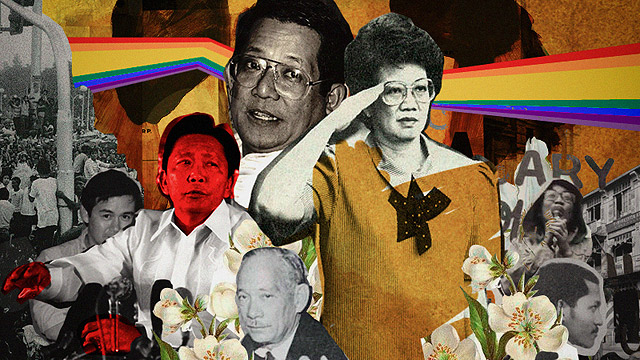 Why is Yellow the Middle of the Rainbow?

Hate it or not, the "dilawan" is probably part of your DNA, too. 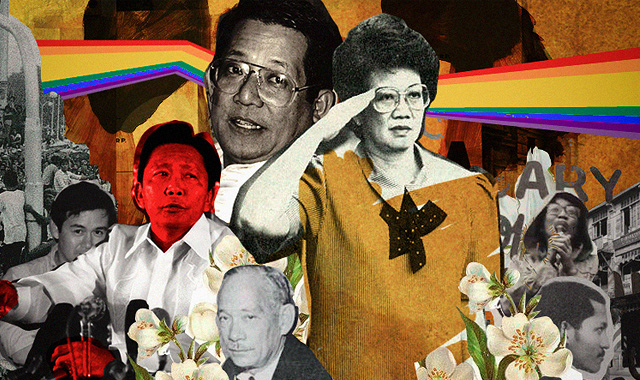 Others are giving you their lives on fields of battle,
Fighting joyfully, without hesitation, or thought for the consequence.
How it takes place is not important. Cypress, laurel or lily,
Scaffold or battlefield, in combat or in cruel martyrdom,
It is the same when what is asked of you is for your country and your home.

(SPOT.ph) In 1994, Kidlat Tahimik made a film titled Why is Yellow the Middle of the Rainbow? A three-hour opus, you can watch thirteen minutes of excerpts online, covering voting in Baguio during the 1986 Snap Elections, the giant rally in Luneta that kicked off protest over the cheating that took place, and EDSA unfolding on TV even as People Power took place in Baguio, too—and in Cebu, in Iloilo, and Davao.

Of course people took to the streets long before EDSA and as we’re seeing, long after, too. The way we take to the streets today—with an insistence on keeping it peaceful, with quite a lot of humor, with pop music and even Ati-Atihan drums and not just stirring anthems, and with noise barrages—owes a lot to a particular era, 1983-1986, which was marked by a particular color, yellow.

And yes, the story of what happened from 1972-1986 is a long and complicated one you should get to know. If our nation can be compared to a tapestry, then it is composed of threads of different colors. We would not have the whole without these individual threads. And each has its rightful claim not only to the past, but on our living present.

But let me pick out one thread, the yellow one.

No one was yellow until 1983. Prior to that, a dictatorship propped up by guns and show trials was primarily resisted with the gun. Resistance was more often seen in the hills, with occasional outbursts of urban terrorism.

But in 1978, though there had been outbursts of protests in the streets before, resistance for the first time became big time, with a noise barrage in Manila on the eve of rigged elections for the parliament known as the Interim Batasan Pambansa (quite an embarrassment; Ferdinand Marcos held a press conference accusing foreign correspondents of meddling).

The noise barrage was important not only because it showed, at long last, that not just a few, but many, were willing to thumb their noses at the Great Dictator. It was important because it was a sign that people were seeking out a middle path between the “constitutional authoritarianism” of Marcos and the Maoist revolution being fought in outside the cities.

The central core of that middle path was that change should come through peaceful means because violence begets violence; that there could be a movement that stressed people from all walks of life could come together, and build together, in contrast to class war, which preaches the liquidation of one part of society by another; and that the rigged elections of the dictatorship could be subverted: restoring democracy, as Cory Aquino later put it, by the ways of democracy.

In 1983, after three years of self-imposed exile, Ninoy Aquino decided to come home from Boston. His reasons were interesting. He wanted to appeal, if not to Marcos’ sense of goodness, then at least his sense of history. The dilemma of all dictators is that, having concentrated power in their own hands, they could neither risk nor afford to put in place a proper plan for succession, much less provide for a qualified successor. Ninoy, along with many others, had heard the dictator was quite possibly terminally ill; here was a chance for Marcos to redeem himself. But, as we all know and as Teodoro M. Locsin wrote, “they killed Ninoy.”

A former senator, Eva Estrada Kalaw, during the meetings to organize a suitable welcome for Ninoy, hit upon a pop song from the early 70s, to mark the occasion: “Tie A Yellow Ribbon Round the Ole Oak Tree.” Listen to it, and you’ll understand why. And also: why yellow became the color that would dominate the next three years of our national life.

There was more to it than the pathos of the song or the circumstances that surrounded a hopeful return turning into a national outpouring of grief. It was what it took for that grief to be publicly expressed. When people decided to line up at Times Street, Quezon City, to view Ninoy’s remains, it required an individual act of courage for every single person who decided to show up. By then, most everyone knew what the dictatorship was capable of—not least because Ninoy’s assassination left no room for thinking otherwise. And yet, they came.

Carmen Guerrero Nakpil, friend and supporter of the Marcoses, heard it from the Marcoses themselves. In August, 1983, they came to realize it was no longer Ferdinand Marcos versus Ninoy Aquino; it had become Ferdinand Marcos versus the Filipino people. As the people lined up, as they went to Santo Domingo church for the funeral, and then escorted Ninoy to his final resting place, the government could do nothing. All it could do was to pretend nothing had happened, with the government-controlled media reporting someone had been killed by lightning sitting in a tree—while ignoring the funeral.

The fairy tale of the Emperor having no clothes is the story of peaceful protest; of speaking truth to power without engaging in brutality to match the brutality. Where once those in authority had held a nation captive, now it finds itself under siege—until “The walls behind which authority has been sheltering crack and then burst.”

What begins—and can end—spontaneously, however, requires commitment and clear-headed thinking. It is not as if the Great Dictator who as recently as 1981, had marked his own sham inaugural with Handel’s “Hallelujah Chorus” (think of the words! “And He shall reign for ever and ever…”), rolled over and meekly surrendered. He would, until the very end of his presidency (and beyond, so long as he lived and breathed) try to use the gun to hold on to power.

So elections would be contested, and people would die, in 1984 and 1986. But there were the Ati-Atihan drums on Ayala Avenue, when windows were opened in the skyscrapers so yellow confetti could rain down on those marching below. There were those who burst into hotels to serenade columnists and politicians in the pocket of the dictator with “How Much Is That Doggie in the Window?” And the noise barrages, the hand-made signs, the prayers, the earnest conversations, mimeographed statements and smuggled Betamax tapes with forbidden documentaries from abroad—the social media of those times—passed from hand to hand, continued.

Cory Aquino—and others—were the focal point of many of these activities, but they were composed of hundreds, then thousands, then tens of thousands and eventually, millions, coming together; of individual decisions to take a stand and by so doing, to take a risk. The story of the EDSA Revolution itself is the story of individuals making up their own minds on what to do, down to each person—many of them nameless to this day—deciding whether they would stand their ground or face down the tanks bearing on them in EDSA.

We know what happened after that. As Time magazine famously headlined, “Now comes the hard part.” And it was terribly hard. There were coup attempts, there was infighting, there was triumph and disappointment. There was no living happily ever again; just the slow, painful slog of daily life. In power, Cory was president and like any president, became accountable for her actions; to be yellow was to prove that all that glitters is not gold.

To be yellow then, was not to be in power or to use yellow as the color of a political party composed of too many veterans of the Marcos years and exhibiting too many of the old bad habits that had turned politics into a disgraceful calling. To be yellow was to be Chino Roces who, upon being honored by Cory Aquino with the Philippine Legion of Honor, did what yellow people are supposed to do: speak truth to power. With dignity, yes; with firmness, always.

And indeed, yellow only matters—it only works, as both Cory Aquino and her son found out during their presidencies—when yellow isn’t in power and can thus speak truth to power. It mattered then, and matters now, because being yellow once again boiled down to making an individual decision to take an individual stand: yes, with like-minded people, but also, with people who heartily hate you, but share enough in common with you to be compelled to take a stand, too. This is what bothers—and is bothersome—about those who take yellow to heart. They will debate, they will argue, they will insist on what everyone should actually insist on—to take part—with you with as much vigor as they argue among themselves.

That person beside you, or who responds to you, as you ask people to honk their horns in protest? The person in black, or any other color? Chances are, they’re Yellow, too. I’m not saying that “We All Live in A Yellow Submarine,” but maybe you’ll understand why yellow matters. To light a candle in the darkness, to be a source of light in the midst of gloom, requires at the very least, a touch of yellow.