UP Pep Squad takes the Mannequin Challenge to a whole new level
Loading
Already a member? Log in
No account yet? Create Account
Spot.ph is your one-stop urban lifestyle guide to the best of Manila. 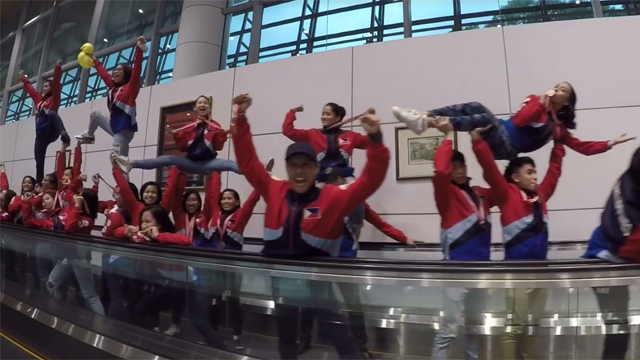 Be still, their coach said.

(SPOT.ph) After planking, the Ice Bucket Challenge, and the Running Man, the latest viral video craze—the Mannequin Challenge—features people staying still in front of the camera while music plays in the background. The University of the Philippines Varsity Pep Squad (a.k.a. UP Pep Squad) joined in on the fun and posted their own version. But it wasn't like any other Mannequin Challenge!

En route to Indonesia, they posed for the camera while taking a walkator at the Kuala Lumpur International Airport in Sepang, Malaysia. They didn't only imitate mannequins but also showed off their pyramids and splits that would later earn them six medals from the 2nd Asian Cheerleading and Dancesport Championship in Jakarta on November 26 and 27.

The video, posted on November 24 by Coach Jourdan Bartolome, has since gone viral. Another clip, posted on November 28 on their official Facebook page, has garnered more than 320,000 views and almost 5,000 shares as of writing. The second video proved that they have, indeed, brought home the awards.

The Philippine team for the international competition was composed of members of the UP Pep Squad and the UP Filipiniana Dance Group. They earned a gold medal for the Mixed Group Stunts category, three silver medals for the All-Female Team Cheer, Cheerdance Duo, and Cheerdance Group categories, and two bronze medals for the All-Female Group Stunts and Mixed Team Cheer categories. They will again represent the country in 2017 at the 9th Cheerleading World Championships in Takasaki City, Japan.

Mannequin Challenge Up Pep Squad Airport Indonesia Malaysia
Your Guide to Thriving in This Strange New World
Staying
In? What to watch, what to eat, and where to shop from home
OR
Heading
Out? What you need to know to stay safe when heading out