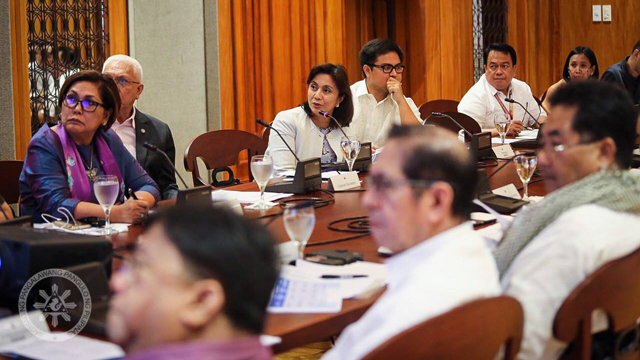 Is this a breakup?

(SPOT.ph) When President Rodrigo Duterte was elected to the national position, it took a long time before he offered Vice President Leni Robredo a seat in his cabinet. He even said in a press conference in Davao City on May 31: "Alam mo, wala ako talaga. I am...non-commital ako diyan. You know why? Kilala ko si Bongbong Marcos, I do not want to hurt him." The younger Marcos was Robredo's neck-to-neck opponent during the elections.

In barely five months, the Housing and Urban Development Coordinating Council (HUDCC) pushed housing projects under a Community Mortgage Program, which is part of Robredo’s directive "to mainstream people’s participation in social housing financing programs for urban poor families." Through the financing program, informal settlers are provided affordable community loans for buying land and constructing houses. Resolutions in the government's housing program for soldiers and police were also implemented. A memorandum was also signed with the Bureau of Internal Revenue and National Housing Authority to cut red tape and fast-track applications for socialized housing projects in an effort to move Yolanda victims into decent homes more quickly.

Thus, it was a surprise when Cabinet Sec. Jun Evasco, Jr. texted Robredo, "relaying the President’s instruction through Bong Go to desist from attending all Cabinet meetings starting this Monday, December 5.” Not being able to meet with the executive board would make it impossible for the housing czar to perform her duties. "Hence, I am tendering my resignation from the Cabinet on Monday, December 5, 2016," Robredo said in a statement released on December 4 through her website. "However, as your duly elected Vice President, I will not allow the Vice Presidency to be stolen. I will not allow the will of the people to be thwarted. I will continue to serve the Filipino family and fulfill their dream for a better life," she continued.

With this, the hashtag #LabanLeni trended again on Twitter, a phrase that was used as a battle cry when Filipinos awaited the election results in May.

Robredo and Licuanan are both decent and true public servants. That Duterte cannot work with them says a lot. #LabanLeni #LabanLicuanan

to everyone saying "buti nga" regarding how they treated Leni, i hope your future employers fire you via text message. #LabanLeni

Leni Robredo Metro Manila News Housing And Urban Development Coordinating Council Vice President Rodrigo Duterte Bongbong Marcos
Your Guide to Thriving in This Strange New World
Staying
In? What to watch, what to eat, and where to shop from home
OR
Heading
Out? What you need to know to stay safe when heading out