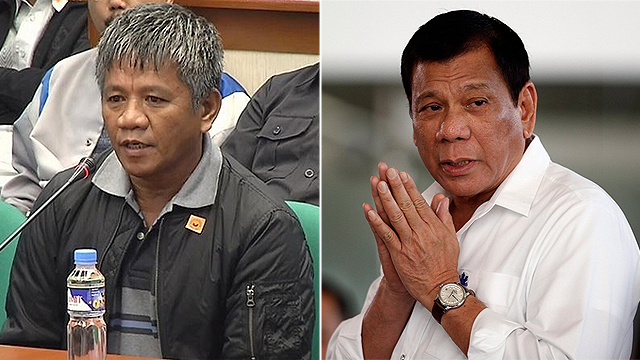 Matobato files complaint versus most powerful man in the country

(SPOT.ph) Edgar Matobato, who was first called on the witness stand in September for the public hearing on the alleged extrajudicial killings, formally filed a complaint before the Ombudsman on Friday, December 9. His complaint-affidavit claims that President Rodrigo Duterte, Philippine National Police chief Ronald “Bato” dela Rosa, and a number of police officers in Davao City were involved in the so-called Davao Death Squad.

Portion of Edgar Matobato's complaint vs Pres. Duterte & 27 others pic.twitter.com/NsqsLVdkaG

On December 5, the Senate Committee on Justice and Human Rights and the Committee on Public Order and Dangerous Drugs released a joint statement which says that there's not enough proof of state-sponsored killings through the alleged DDS. The report also dismisses Matobato's testimony as it is "riddled with lies and inconsistencies."

Prior to this decision, Duterte said that Matobato, as well as the person who induced him to testify, committed perjury by lying under oath. “If you know it's a lie and you egg a person to testify, you are an active participant. "Sige, sige mag-testify ka, that is subornation of perjury," he said on September 19 while in Davao City following the bombing incident.

In an interview with Gikan sa Masa Para sa Masa in May 2015, Duterte dared the New York-based Human Rights Watch to file a case against him in court. He also said: "Ako, ako daw death squad? True, that's true." A couple of days later, he retracted and claimed that when he said DDS, he actually meant "Davao Development System" and not "Davao Death Squad." "I always use the word. Walang DDS d’yan. That is Davao Development System. That is my guiding principle," Duterte clarified.

In Philippine law, the president has "immunity from suit and other legal proceeding." But Atty. Rosario Setias-Reyes, President of the Integrated Bar of the Philippines, explained in an interview with CNN Philippines on December 2 that "it will be there only as long as he is sitting president. After that, complaints can already be filed."

Metro Manila News Extrajudicial Killings Matobato Duterte
Your Guide to Thriving in This Strange New World
Staying
In? What to watch, what to eat, and where to shop from home
OR
Heading
Out? What you need to know to stay safe when heading out