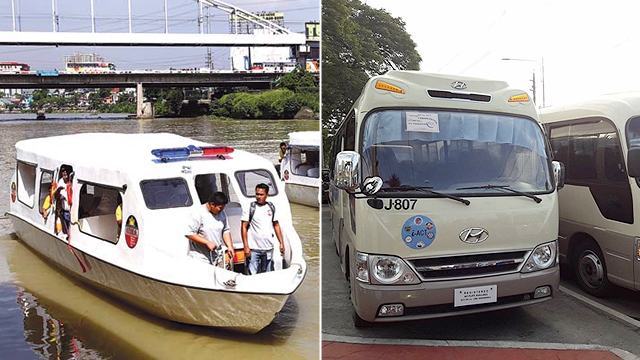 (SPOT.ph) The Pasig River has become a not-so-pleasant sight in the Metro because of water pollution, courtesy of so-called "industrial development." But if you think about it, this dirty river is possibly our traffic problem's only hope. It connects Laguna de Bay to Manila Bay and bisects Metro Manila. It can be our very own Grand Canal, much like Venice's own water highway.

Sen. Ralph Recto even suggested in September that the revival of the ferry system in the Pasig River is our best option. "This nautical highway is wider than the widest road. It is toll-free. It is ready to use. It is not beset by right-of-way issues. Unlike roads, its rehabilitation will not cause traffic jams," he said.

With this in mind, the Inter-Agency Council for Traffic launched the "Enhanced Pasig River Ferry Service" on December 9 to provide Metro Manila residents with an alternative means of transportation especially this holiday season. A free shuttle service is now available to passengers going to Guadalupe Station from Uptown Bonifacio in Taguig City. This runs until the first week of January 2017.

The shuttle fleet, which is in partnership with Megaworld Corporation, consists of eight 30-seater coasters for the Uptown Bonifacio-to-Guadalupe Station route and three 15-seater vans for the Escolta Station-to-Lucky Chinatown Mall route. The Pasig River Ferry Service also added new 15-seater boats to its fleet in October.

Extended operation hours were also announced for the whole month of December:

Pasig River Pasig River Ferry Service Metro Manila News Traffic
Your Guide to Thriving in This Strange New World
Staying
In? What to watch, what to eat, and where to shop from home
OR
Heading
Out? What you need to know to stay safe when heading out