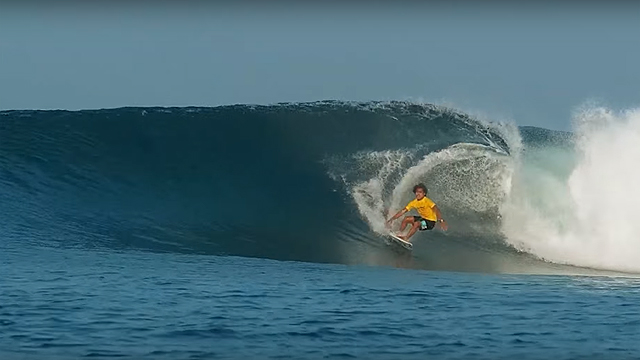 The Department of Tourism Should Really Invest in Photographers

(SPOT.ph) When it comes to photography, taking photos of surfers ripping some waves is probably one of the biggest challenges. First, you should be an actual surfer just so you know you can anticipate how your subject—both the wave and the surfer—will move. Or if not, you need to be well-versed in taking action shots. Second, you need the right gear, especially if you're serious about taking photos that are worthy of sports magazines. Third, you need to be able to go all over the Philippines because our beautiful archipelago has a bounty of waves of all shapes and sizes. So when the Department of Tourism allegedly used a surf photo without permission or credit, it was kind of a big deal. It doesn't help that the agency has a not-so-great track record when it comes to these things. 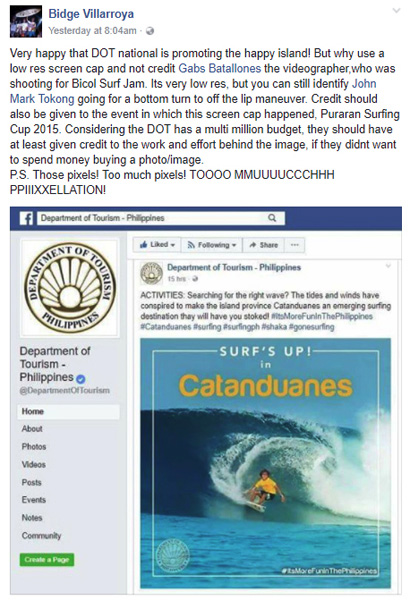 Villaroya, a local surfer from Gubat, Sorsogon, posted on August 10 a screen capture of post by the Department of Tourism (DOT) - Philippines Facebook page. The promo says: "Searching for the right wave? The tides and winds have conspired to make the island province Catanduanes an emerging surfing destination [sic] will have you stoked!" It's matched with a pixelated photo of the barreling waves on the island.

On his post, Villaroya reveals: "Very happy that DOT national is promoting the happy island! But why use a low res screen cap and not credit Gabs Batallones, the videographer who was shooting for Bicol Surf Jam. It’s very low res, but you can still identify John Mark Tokong going for a bottom turn to off the lip maneuver." He also points out the post should have at least mentioned the event featured in the photograph: Puraran Surfing Cup 2015.

As it turns out, the photo that DOT used was taken from a video released by Pinas, the agency's newly launched travel program aired on state-run PTV-4, for their Catanduanes episode. This segment of the supposed Pinas video was used without permission from Batallones. "Copy-paste of the copy-paste!," Villaroya exclaims. “Meta-copy paste. What an exciting time to live,” says another comment on the post.

To shed some light on the situation, SPOT.ph got in touch with Rhoel Velayo Fernandez, Office of Public Affairs, Communications, and Special Projects of DOT. He explains that it was his decision to use the image that was based on a from Pinas. "What I did not know was the said video was not taken by the  team. I made apologies to Gabs and soon as I learned of the allegations. If we had known that said footage was shot by another party, we would have asked permission ourselves," he admits.

He got in touch with the Pinas team and asked them to reach out to Batallones as well. The  Pinas team sent this message to Fernandez regarding the issue:

"'Yong action-packed surfing in Puraran Beach for Catanduanes episode are definitely not from the team. When team went there to shoot for a surfing segment, the water was calm. Bago kami mag-shoot ng surfing 101, I asked Chris and Aireen Tanael,  ' interview ko surfing. Also, they are the famous surfers in Puraran. I asked them may surfing footage/videos to support the claim in Puraran, a beach surfer will experience a 'Majestic Surfing because of its breathtaking long-barrel-type waves.' Puwede ko raw ‘yong videos from YouTube daw. To make sure about the video, ‘yong vids at ' okay . 'Yong video was a compilation of their surfing event."

SPOT.ph has reached out to Aireen Tanael but has yet to receive a response. On the other hand, Batallones confirmed that there was no permission secured by either the Department of Tourism or  Pinas. He even quipped to those who were following the thread: "Hayaan , nag-sorry ‘yong producer. Pasensiya ." Villaroya tells us, "Isa lang video, and that was Gabs."

"I have nothing but respect for the people who put up with a lot to get these wonderful images," Fernandez punctuates his explanation.

As of writing, DOT’s post has since been taken down, but you can still find Pinas’ “Catanduanes” episode teaser with the uncredited footage on YouTube. (The iTravel Pinas video has been taken down after this article came out.)

UPDATE (August 13, 2017): "If you ask me, it was not the whole DOT's mistake," Batallones further explains to SPOT.ph. "I don't think the whole agency should catch fire for one man's mistake. Being such a large agency, it's very difficult to keep track of everyone's actions. The one who contacted me from iTravel is a certain Mark Dela Rosa. According to him, he is the producer and the one at fault. He admitted this to me. I asked for proper compensation and an explanation. My material was already used online and in multiple platforms. There is no way to take this back. All i got from him was a sorry. This action is disrespectful to the [surf and photo/video] industries. It takes a lot of time, money and effort to produce this material. Honestly, this is not about the money anymore. It's about ethics and respecting one's work."

Department Of Tourism Surf Catanduanes Gabs Batallones Bidge Villaroya Rhoel Velayo Fernandez
Your Guide to Thriving in This Strange New World
Staying
In? What to watch, what to eat, and where to shop from home
OR
Heading
Out? What you need to know to stay safe when heading out