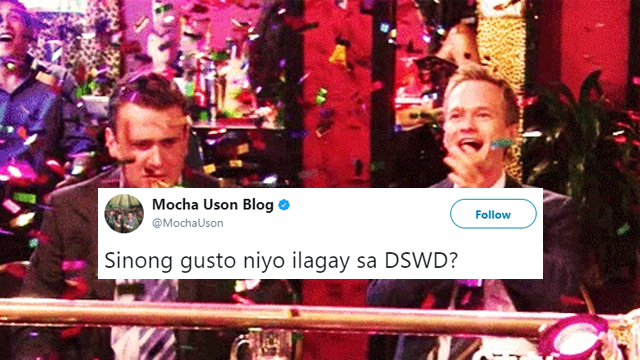 This Online Poll Is the Biggest Burn You'll See Today

It all started with "Sinong gusto niyo ilagay sa DSWD?"

(SPOT.ph) Presidential Communications Office Assistant Sec. Mocha Uson is known as one of the most vocal critics of Vice President Leni Robredo. During the aftermath of Typhoon Nina, which struck Bicol Region in December 2016, she criticized the public official for being on holiday with her family in the U.S. instead of helping out her constituents. However, the Office of the Vice President said that the Robredo was directing relief operations in Naga City from thousands of miles away. In March 2017, Uson's segment on DZRH was suspended after the host "attacked Vice President Leni Robredo in a coarse, vicious language dripping with malice," a complainant said. Well, her biggest rival seems to lead an online poll that the entertainer started herself which goes, "Sinong gusto DSWD?" 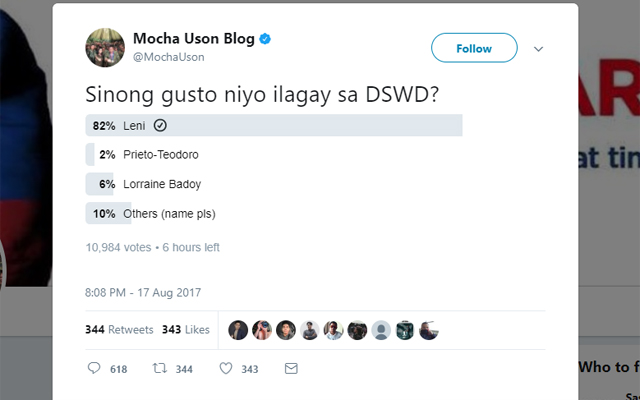 This comes after Commission on Appointments rejected the appointment of Social Welfare Sec. Judy Taguiwalo on August 16. To hear the pulse of the public, Uson started an online poll on Twitter on August 17, 8:08 p.m. that lists Leni Robredo, Nikki Prieto-Teodoro, and Lorraine Badoy as choices for the now-vacant position.

Fifteen hours later, the Vice President leads at 82% of more than 10,000 voters, much to the amusement of many. Twitter had a heyday out of it.

When you try to bash the VP, and you're working the Twitter crowd. pic.twitter.com/9GKZND8g94

But who cares about what the public wants, right?

Abella on Asec Uson's poll on Sec. Judy's replacement: I'm sure the President has other ways of measuring capability of other candidates.

Twitter Mocha Uson Social Media Leni Robredo
Your Guide to Thriving in This Strange New World
Staying
In? What to watch, what to eat, and where to shop from home
OR
Heading
Out? What you need to know to stay safe when heading out