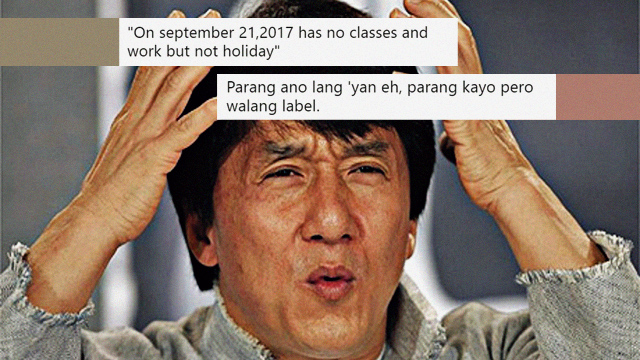 So Is September 21 a Holiday or Not? The Internet Ponders the Non-Holiday "Holiday"

We hate to quote Justin Bieber, but what do you mean?

It can be remembered that he said in a PTV4 interview on September 14: "This early, I am announcing that I am ordering a holiday para walang masaktan, walang ano kung may demonstration diyan, magkagulo." By September 18, he clarified his previous statement and said: "September 21 is not a holiday. I have declared it as a 'Day of Protest.'" No official announcement or Executive Order has been released by Malacañang, but the President said that classes will be suspended and government offices closed.

Now people are more confused than ever by what he meant.

UPDATE: president duterte says no work and classes on september 21 but clarifies he will not declare a holiday.

"President Duterte says no work and classes on September 21 but clarifies he will not declare a holiday." pic.twitter.com/9JRQeNZ7pS

It's more confusing than math.

"President Duterte says no work and classes on September 21 but clarifies he will not declare a holiday." -- Addict lang?#TindigPilipinas

"no work and classes on September 21 but not a holiday"
"parang relationship nyo, parang kayo pero hindi, malabo"

a poem:
no class, no work, no pay
september 21 is not a holiday

May igugulo pa ba yung no work and classes pero not suspended/holiday? Bale, count as absent, ganun ba??? No work, no pay on September 21?

Do we need a medical certificate?

'what's with ur guy, can't even decide if he wants to holiday or not?'

"President Duterte says no work and classes on September 21 but clarifies he will not declare a holiday." Pinas nga naman pic.twitter.com/sw2dl9LSp4

GIF use is on point.

It was also initially announced by the Office of Civil Defense that they're holding another nationwide earthquake drill on September 21—a decision met with much dismay and a comment by Bayan secretary-general Renato Reyes as "insensitive to the plight of Martial Law victims." With the recent turn of events, the National Disaster Risk Reduction and Management Council opted to postpone the activity to make way for this "Day of Protest."

Martial Law Duterte Marcos September 21 Holiday
Your Guide to Thriving in This Strange New World
Staying
In? What to watch, what to eat, and where to shop from home
OR
Heading
Out? What you need to know to stay safe when heading out