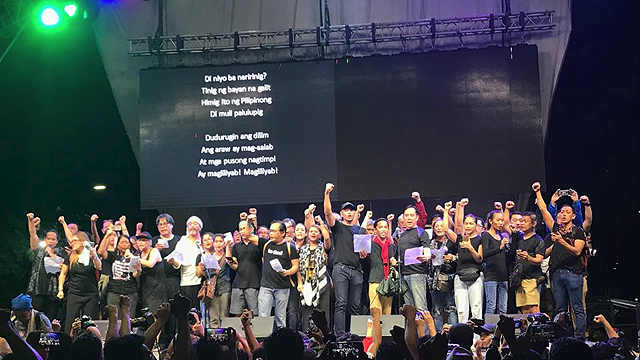 Pinoy Version of a Les Miz Piece, a Game of Thrones Effigy, and Other Creative Ways of Protest

Meanwhile, on the other side...

(SPOT.ph) Thousands of Filipinos gathered at Luneta Park in Manila on the afternoon of September 21 to condemn alleged extrajudicial killings and the administration's bloody war against drugs, remembering the fight against dictatorship and tyranny as well as the violation of human rights during Martial Law. Rallyists ranged from kids and students who are #woke AF to survivors of former dictator Ferdinand Marcos' brutal Martial Law period. They brought placards bearing witty words of protest, bells which they sounded off at the same time, and an ounce of courage despite rumors of bombings (and the sudden downpour). Onstage, musicians, thespians, performance artists, and writers came out with their most creative ways to show their indignation.

Audie Gemora, Cherie Pie Picache, Agot Isidro, and fellow thespians onstage a Filipino translation of "Do You Hear the People Sing?" from Les Misérables—a 1980 musical about the anti-monarchist Paris Uprising of 1832. The piece “Di Niyo Ba Naririnig?" is a translation by composer Vincent de Jesus with Rody Vera and Joel Saracho. A day before the September 21 rally, a lyric video performed by Eunikkoh online and earned more than 300,000 views as of writing. The piece starts with: "Di ba , ng ? Himig ng Pilipinong di muli ."

Another theater group, the Philippine Educational Theater Association, denounced the increasing human rights violations in the country through a song titled "Quota." It threw shade on the police's alleged target number of people to be killed under the government's war on drugs. The song goes: "Meron quota, quota, pa ng quota. Basta may , !" 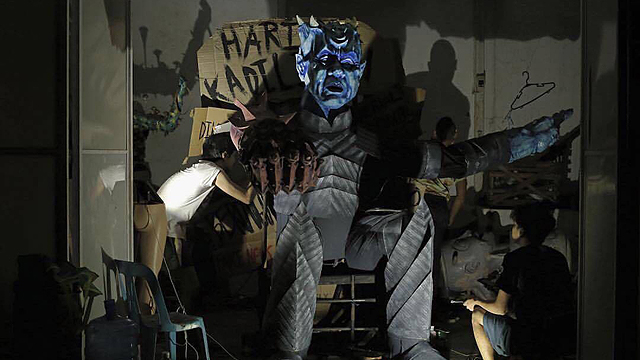 Effigies also took a more creative turn with an infused pop culture reference. Resbak, an artist alliance, unveiled "Night King: Kadiliman" on September 19 as the group's effigy of the president. Inspired by the villain in the American TV series Game of Thrones, it "portrays Duterte as a real-life Night King: an ominous figure who wields death and fear to cow the people into silence and submission in the face of ongoing community struggles for life, land, jobs, and rights." The effigy was burned in Mendiola two days before the September 21 protest.

WATCH: The "Rody's Cube" being rotated at the convergence point of protesters along España, Manila pic.twitter.com/9AnM3PxiAZ

Another effigy, dubbed as "Rody's Cube," showed the faces of Duterte, Marcos, German dictator Adolf Hitler, and a lapdog. Like the 3D puzzle Rubik's Cube, you can spin the images and mix and match the various sides. The 10-foot effigy was burned by militant groups in Mendiola before they headed to Luneta Park—a no-burn zone.

Writers also took their protest to pen and paper. High Chair, a nonprofit alternative press, released this time in 2016 a digital chapbook of literary works that poses the following questions: "How do we live our lives so that we are not unwittingly enabling the very structures and conditions we protest loudly against? What do these times demand from us as writers and artists?" Educator and film scholar Roland B. Tolentino poses in "Never Again, o Why Never Will There Ever Be a Never Again" that the reason why we can't (and shouldn't) "move on" from Marcos' Martial Law is because we're still experiencing its effects until today. 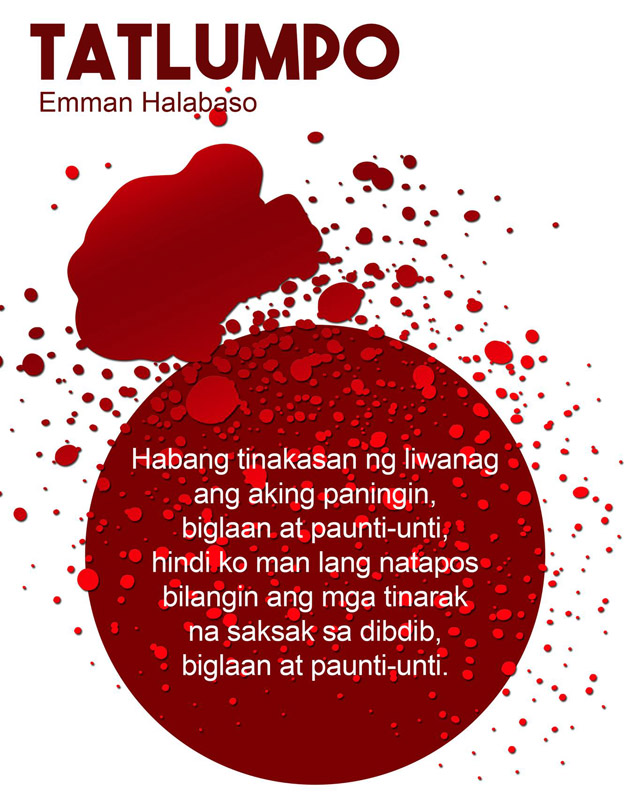 KM64, a writers’ collective, posted a series of poems on social media that condemn the rampant killings, especially of minors. Titles include: "Packaging Tape," "30 Saksak Kay Kulot," "Menu: To Serve, To Protect," and others.

Beyond the Luneta Park rally, theater shows and film screenings portraying the atrocities of Martial Law are still showing at the Cultural Center of the Philippines until September 28. This is part of Pista Rizalina, a festival that uses art as commentary on social, political, and cultural issues.

Duterte Marcos Martial Law Theater Art Poetry
Your Guide to Thriving in This Strange New World
Staying
In? What to watch, what to eat, and where to shop from home
OR
Heading
Out? What you need to know to stay safe when heading out