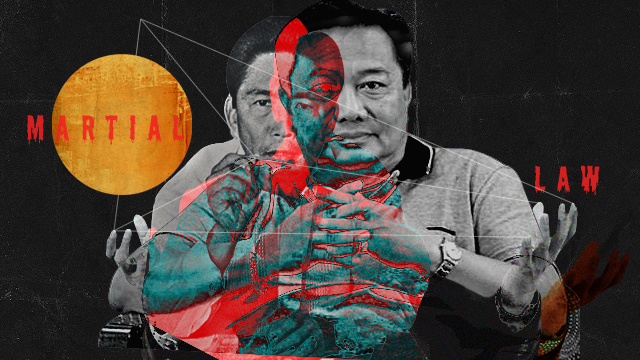 The irony is that they're the ones who are pushing for it.

(SPOT.ph) It is quite amusing to watch members of the legislature fall over themselves in the effort to approve the proposal of the administration to extend the declaration of Martial Law in Mindanao. All sorts of reasons have been given by all sides both pro and anti as to this administration initiative. Legal reasons, business reasons, human rights reasons, you name it, it has frequently been given.

Whatever is said by proponents and critics of Martial Law, the basic premise of a declaration of such is that of a failure of civilian governance. In other words, the military is brought in to stabilize a situation wherein civilian agencies including the police play second fiddle. The implementation of said declaration may be in its classic repressive manner as what Ferdinand Marcos had done in 1972, or watered down as Rodrigo Duterte’s in 2017. Still, there will always be an effect on the military especially if it is prolonged in nature. The effect will be on the Armed Forces of the Philippines’ appreciation of the Constitutional declaration of civilian supremacy over the military.

One must understand that what drives the instability in Mindanao is conflict. there is a product of social justice issues. Social justice issues in Mindanao are frequently a product of feudal power relations perpetrated by political entities in collaboration with local representations of national government interests. Hence you have the growth of rebel groups, terrorist groups, and even criminal gangs that take advantage of the disenfranchisement caused by the inequities and injustices.

The military has been immersed in this situation for the most part of the country’s existence as a sovereign nation. From the 1950s Huk and Kamlon rebellions, the 1970s Moro uprising, the 49-year-old CPP NPA insurgency, the MILF campaigns, and this wave of terrorist organizations that sprouted up like mushrooms throughout Mindanao since the 1990s, of which the latest is the Maute. In this long immersion into counterinsurgency, the military has always believed one thing. In the matter of successfully concluding operations, the one thing that hampers them from doing so politicians. It is a belief rooted in the military’s experience wherein they see themselves as being unwillingly thrust into the huge task of counterinsurgency operations with little or no support from civilian agencies. Whether or not this is a flawed perception of theirs, the fact remains that it is an existing belief.

The view among a number of military men of politicians is very unflattering, to say the least. The following are the prevailing perceptions:

Politicians have their uses: For a number of military men, politicians are useful in the sense that they can help in the advancement of careers. As positions in the service are not enough to cover each and everybody’s ambitions for promotion, that extra nudge from a politician may serve to create good career advancement. That is seen a lot in selection processes for top positions in the military. It also ends up putting them in the clutches of their political patron.

Politicians cause problems: As had been said, the conflicts are generated by locally occurring social justice issues borne out of feudal political power relations. Hence in many instances, local political entities are seen as creating the very instability that the military is brought in to deal with. A strange relationship is created wherein the military becomes the guarantor of local political feudal interests so it can pursue its mission of containing rebels and lawlessness. A relationship that because of its contradiction, causes so much friction between local politicians and military personnel not unless the latter become willing participants in the system.

Politicians insult them: During congressional hearings in aid of legislation, it had previously been a common occurrence for military officers to be harangued by members of the legislature. That created irritation among many members of the military and in fact was something Duterte capitalized on when he assured officers that under his administration the military would be spared of that. Thus, in the eyes of a military officer, it is bad enough that to advance their careers there has to be a certain level of kowtowing to politicians. It is bad enough also that many local politicians are the cause of many instability problems that the military has to contain or quell, which is also aggravated by insulting behavior from politicians themselves.

Since the military has been called upon to implement a one-year extension of Martial Law in Mindanao, the following is the context that they will be undertaking this mandate.

There exists a very serious conflict situation in Mindanao. Will political decisions from Malacañang up by signed agreements with major secessionist groups be enough to neutralize armed opposition and terrorism? This is not the first time that peace agreements signed did not bring out the required peace dividend. Hence, the conflict is sure to be prolonged and cannot be wished away by a mere statement that it will all be successfully concluded within a one year period. Anybody who seriously believes that these can all be solved within a one year period must have learned counterinsurgency from excessively playing Counterstrike.

Martial Law gives the military additional powers to quell rebellion but gives them a one-year deadline. In other words, military frustration against incorrigible local political interests may lead to pressure for an aggressive implementation of Martial Law with broader powers for the AFP.

Ever since the Duterte administration embarked on policies and actions that have been seen as weakening or compromising institutions such as the Supreme Court, Congress, the police, et cetera, it has enabled the military to be seen by many as the sole institution of stability. The recently concluded Battle of Marawi gave additional positive exposure to the military which was also greatly aided by an excellent information operations program directed by media-savvy officers and spokesmen. The military it seems is beginning to flex its muscles with that stature it now has. It appears to be a bit more aggressive in some of its statements. One must remember that the military is still recuperating following the Marawi battle while maintaining a nationwide high level of alert and tempo of operations. It may not be as patient as before when it comes to perceived interference.

Which is why it really is amusing to watch legislators a.k.a. politicians fall over themselves in efforts to support Martial Law extensions. It is like watching them sign their own termination with gleeful abandon. So what should be done as a solution? it may be asked of politicians especially at the local level to behave themselves and do their best to solve problems at their areas lest one day they wake up and see a colonel or a brigadier general occupying their offices. In fact, the military has a lot of generals and colonels to spare for that. As for national level politicians, it would really be helpful if there is a sound strategy guiding this use of Martial Law so as not to get on the bad side of increasingly frustrated and irritable members of the military. The only way to do that is to have a sound strategic plan and a clear grasp of the situation. Unfortunately for the Duterte administration, it has all the appearances of a free for all party with many departments and agencies frequently contradicting each other on matters of national security. If this continues, it will be difficult to keep a firm grip on the military which is imperative in the execution of Martial Law. If the administration loses control of the situation, it will develop into military adventurism against civilian political authority.

Thus, this may be said as a gentle reminder to many politicians who support Martial Law, ”Be careful what you wish for.”

Military Rodrigo Duterte Marawi Mindanao Martial Law
Your Guide to Thriving in This Strange New World
Staying
In? What to watch, what to eat, and where to shop from home
OR
Heading
Out? What you need to know to stay safe when heading out