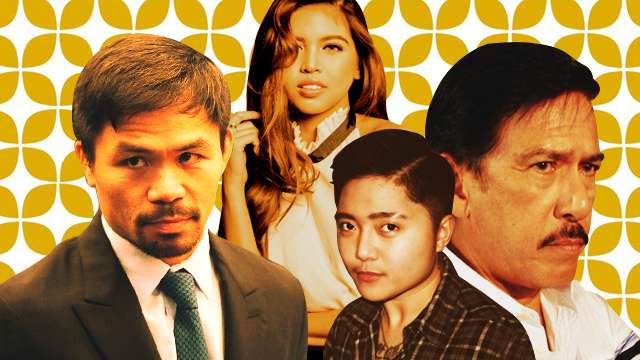 Quotes of the Year: 10 Unforgettable Statements That Defined 2017

(SPOT.ph) Now that 2017—a complicated year to say the least—has come to a close, it’s time to look back at what public officials and celebrities have said on national television, interviews, and press conferences. There were a lot of Senate probes and investigations on things we never thought we’d hear about, such as police allegedly murdering people, bloggers spreading fake news, and the dengue vaccine scare. There were also people who surprised us, took the high road, and imparted words of wisdom. Hopefully, we’ll learn a thing or two from these and make 2018 a bit better.

"My first tweet as Jake." — Jake Zyrus (formerly known as Charice Pempengco) came out as a transgender man in June

It's about more than changing one's name.

"In the street language, when you have children and you are single, ang tawag doon ay na-ano lang." — Sen. Tito Sotto cross-examining Judy Taguiwalo during her confirmation hearing on May 3

His Sotto-isms merit a whole article (or two).

"I have the right to...against self-discri...ano, against self-incrimination." — Assistant Sec. Mocha Uson refusing to answer when asked about the issue of fairness during the Senate hearing on fake news in October

The whole session was a refresher course on responsible journalism (and dictionary definitions).

"Why would you judge a child?" — Bimby Aquino on people questioning his sexual orientation

This 10-year-old definitely makes more sense than most of us.

"Take no prisoners. Just kill them." — President Rodrigo Duterte during his second State of the Nation Address

The president instructed soldiers in Marawi to “shoot them in the heart and head” if they have to fight the Mautes because, otherwise, “they will be detained in Marawi. Wala tayong presuhan.”

"This is a Martial Law na may puso." — Rep. Danilo Suarez supporting the decision of the House of Congress to extend Martial Law in Mindanao until December 31, 2018

We could almost hear the line, "You can't sit with us."

Quotes 2017 Year-ender
Your Guide to Thriving in This Strange New World
Staying
In? What to watch, what to eat, and where to shop from home
OR
Heading
Out? What you need to know to stay safe when heading out