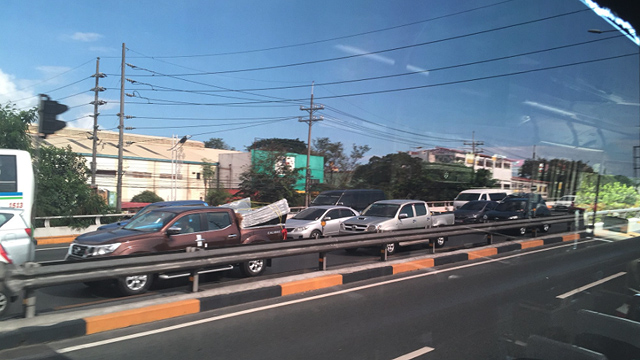 The New Skyway Toll Plaza Is Taking Its Toll on Motorists

(SPOT.ph) The Skyway, an elevated highway stretching from Gil Puyat Avenue in the north to the Alabang-Zapote Road in the south, has been relieving traffic congestion on the South Luzon Expressway since it opened in the late '90s. The toll fee is a bit more expensive, but motorists have been choosing it over getting stuck on the road. That was until a major traffic jam—caused by the new toll plaza on the northbound section near the Ninoy Aquino International Airport on-ramp—angered motorists on January 29, Monday.

"This new toll plaza is an enhancement to the Skyway that we initiated in order to facilitate more efficient toll collection. With dedicated ETC lanes and Cash lanes that can accommodate more tellers per lane, we’re hoping to improve traffic throughout at the toll plazas," San Miguel Corporation President Ramon S. Ang said about the new toll plaza that opened on January 26.

The Skyway admin this morning, after putting a tollgate in the middle of the Skyway pic.twitter.com/ClTAHzyrBH

It consists of three lanes dedicated to the Electronic Toll Collection system and four other lanes for cash payments. With the new system, Skyway users must stop at two toll booths, instead of one. The first one is where they pay the toll, the second one is where they must surrender the thermal receipt. This system sparked rants all over social media, especially since it tripled the usual travel time to the airport. Imagine the stress it has caused for those trying to catch their flights.

Did anyone from the @SkywaySOMCO management go to school? It doesn’t take an engineering degree to figure out that making tens of thousands of cars pass through one tollgate is a bad idea.

Move over, EDSA. Skyway's the new you!

This morning, my devotion revolved around Psalm 46: “I shall not be moved.” God can be funny. In SLEX and Skyway, it “hardly moved!” Missing my flight & buying a new ticket could’ve completely messed me up. Thank God for His Word and His Spirit, we are more than conquerors!

You know it's bad when the only thing left to do is turn to the bible.

To the idiot who oversees and executes the plans for Skyway, I thought your single lane Alabang exit was pure myopic jackassery, but clearly you've outdone yourself with that toll gate in the middle of Skyway. Bravo, you cretin.

Couldn't have expressed it better.

HEADS UP GUYS! There is a new toll system in skyway by NAIA 3 that adds almost 2 hours to your trip! Prepare for heavy traffic!

Left at 7:30 in from lipa and currently still here at skyway!!!

When SLEX and Service Road are faster than Skyway #skyway pic.twitter.com/5V1Ea9tkEj

Skyway now offers an intense traffic jam ever than before. EDSA is quacking.

When there's nothing left to say...

In their defense, Skyway management did say that traffic would be bad. "We apologize in advance for any delay this adjustment to a new system might cause—particularly in the first few days of implementation," said the flyers handed out by toll booth clerks before opening day.

Traffic Metro Manila Ninoy Aquino International Airport Skyway
Your Guide to Thriving in This Strange New World
Staying
In? What to watch, what to eat, and where to shop from home
OR
Heading
Out? What you need to know to stay safe when heading out