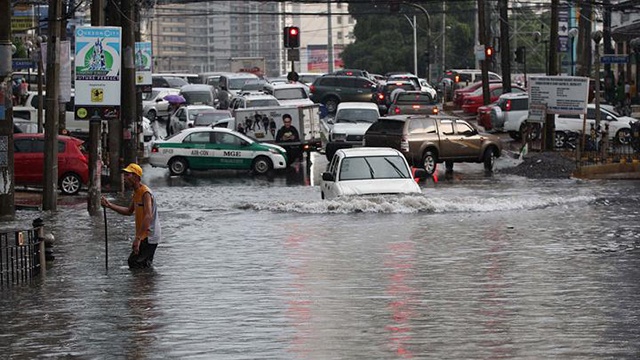 (SPOT.ph) Regardless of those who say otherwise, climate change is definitely real. It's alarming just how much the phenomenon has caused the weather to swing from extreme to extreme in such a short amount of time. Case in point: Despite the earlier sunny morning weather, a torrent of strong rains and flash floods suddenly hit Metro Manila in the early evening of June 21. The Metro Manila Development Authority even announced on their Twitter account that certain parts of the Metro such as Pasong Tamo, Katipunan, España, and Taft would be impassable due to the heavy flooding.

This came as a shock to several city dwellers, who were sweltering under the Metro's typical heat during the day. Many took to Twitter to express their amazement at just how quick the sudden deluge turned the city streets into rivers. Here are some of the craziest tweets about last night's flash floods in the Metro.

and just like that, baha na samin hahaha pic.twitter.com/qaEoJ5vbgG

Well, at least you now have a new swimming pool!

"What's the point about living here in Manila, without experiencing this"

We didn't know there was a log ride in Quezon City!

Check out these casualties.

I became a submarine for 3 minutes and this happens

The more, the merrier?

Apparently I'd have to sleep in the office tonight because baha na naman sa Cityland??

Because work is life.

qaqo KATIPUNAN RIVER IS NOT A MYTH. IT IS REAL.

There's always a first for everything!