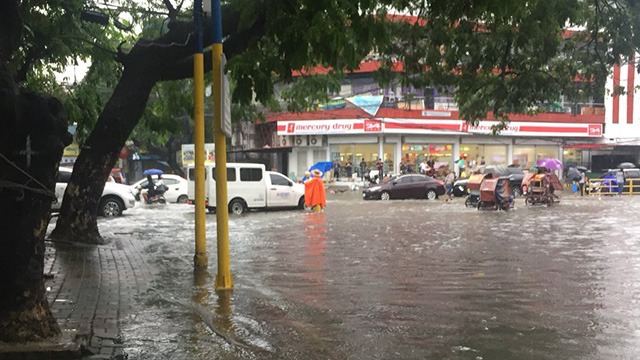 Ever thought of using an old refrigerator as a boat?

(SPOT.ph) As the country anticipates the exit of tropical depression "Henry" from the country, Manileños were greeted by an onslaught of rain and strong winds this morning, July 17. Flooding soon sprang up all over the city, making the commute to work just a little more difficult than usual. As usual, commuters wasted no time posting photos and videos of the, well, watery sights—here are 10 that capture just how wild it got.

Tropical depression "Henry," which entered the Philippine area of responsibility on Sunday, July 15, caused heightened monsoon rains in Metro Manila, Central Luzon, Cagayan, and Western Visayas as it prepares to exit the country today. Due to the heavy rains and flash floods, several schools and universities in Metro Manila, Central Luzon, Calabarzon, and Cagayan have suspended classes in all levels. The Philippine Senate also suspended work today due to flooding in parts of the Metro.

España from Don Quixote St to Lacson Ave as of 8:50am pic.twitter.com/pAjo9GH49G

Imagine playing basketball in this court.

Apparently, you can go river-trekking in Cubao.

Literally, a bridge over troubled water.

Thanks for the reminder!

It's like you placed some toy cars in a puddle.

Are we sure these cars aren't speedboats in disguise?

Well, you can't blame them for lack of creativity.