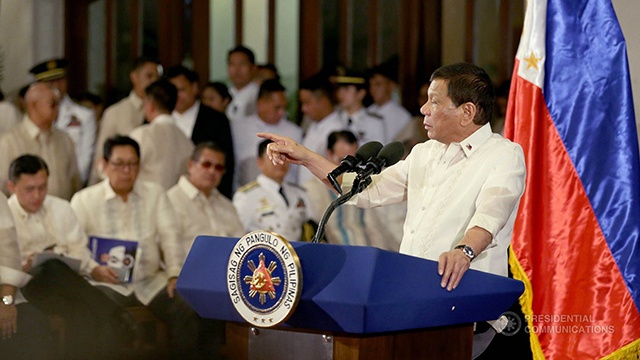 Here's What We Know So Far About the Upcoming #SONA2018

From traffic rerouting to how the President will be projected.

(SPOT.ph) In case you missed it, President Rodrigo Duterte is expected to deliver his annual State of the Nation Address on Monday, July 23, at the Batasang Pambansa in Quezon City. Although there's currently no word on what the President's awaited speech will delve into, here are a few things you should know about the upcoming event.

This year's SONA will be the 80th address in our country's history.
It is a tradition for the Philippine president to deliver an annual State of the Nation Address (SONA), ever since former President Manuel L. Quezon gave the first speech in 1935. There weren't any SONAs delivered from 1942 to 1944 due to the Japanese occupation, and in 1986 when Cory Aquino ascended to the presidency following the People Power Revolution.

It will be directed by Joyce Bernal.
Renowned local film director Joyce Bernal (of D'Anothers and Kimmy Dora) is set to direct the president in his third SONA, taking the reins from director Brillante Mendoza (who directed Duterte's two previous SONAs). Bernal will reportedly use sequencing shots and warm lighting, and will be directing the SONA for free.

It will be short and sweet.
Malacañang spokesperson Atty. Harry Roque has stated that Duterte will be limiting his third SONA speech to only 35 minutes. The president's first SONA speech in 2016 ran for one hour and 32 minutes, making it the longest recorded first SONA in the country's history.

The president will be portrayed as "the father of the nation."
In an interview with the ABS-CBN News Channel, Presidential Communications Asec. Ana Marie Banaag revealed that Duterte will be shown as the nation's father, adding that focus won't be placed on the administration's accomplishments but on "the father who cares about the Filipino people."

Heavy traffic is expected in Quezon City.
Motorists and commuters are advised to anticipate heavy traffic around the Batasan Complex due to the number of politicians attending as well as the protest rallies that are expected. The Metro Manila Development Authority has released the planned traffic rerouting.

Various activist groups will be holding the "United People's SONA."
The Coalition of Justice is organizing what is dubbed as the United People's SONA, a mass rally by various protest groups to be held near St. Peter's Parish along Commonwealth Avenue on Monday at the same time as the president's SONA.

Vice President Leni Robredo will be in attendance.
Despite the advice of those who don't want to see her "insulted and humiliated," Robredo (who recently stepped up as leader of the opposition) announced that she will be attending Duterte's SONA on Monday, as part of her duties as vice president.

The Tagum City Chamber Chorale will be singing the national anthem.
Upon the recommendation of House Speaker Pantaleon Alvarez, the award-winning choir group from Tagum City—which bagged the gold prize during the Sing N' Pray International Chorale Competition in Japan in January—has been tapped to sing Lupang Hinirang prior to the president's SONA.