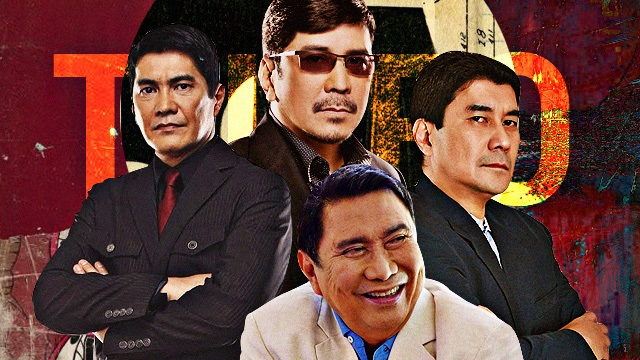 The Tulfo Brothers in the National Spotlight: A Short History

They're always on TV...sometimes, for the wrong reasons.

(SPOT.ph) If you regularly watch the news, read opinion columns, or listen to AM news stations, you've probably heard or seen one or two of the Tulfo brothers. The four—Mon, Ben, Erwin, and Raffy—have always been involved in the news and cultural affairs field as newscasters, writers, and hosts. But for some reason, they always find themselves at the center of attention.

On August 16, Mon uploaded a video of himself cursing at a triage officer at the Philippine General Hospital. The UP community has denounced Tulfo's actions, calling it cyberbullying and doctor-shaming, aside from verbal abuse of someone who's just doing his job. The incident occurred while the staffer was assessing a six-year-old girl's condition after she was hit by Tulfo's driver in Navotas.

In 2010, Erwin was investigated for violating the Philippine broadcasters' code of conduct. This was after the reporter interviewed hostage-taker Rolando Mendoza instead of maintaining the line open for the police officers’ negotiation with the suspect. The 11-hour crisis ended with eight Hong Kong tourists being killed.

In May 2014, Erwin filed a label case against the Philippine Daily Inquirer for reporting that he was involved in the Priority Development Assistance Fund scam. According to the broadsheet, the report was based on documents linking him to the list of beneficiaries of National Agribusiness Corp’s ghost projects.

In June 2014, Senior Police Officer 3 Abubakhar Maglangit filed a complaint against the Tulfo brothers after they called the police officer a thief on their show. This was for an episode aired in 2011.

Mon Tulfo and Raymart Santiago come to blows in public

In May 2012, Mon and actor Raymart Santiago got into a heated (and very physical) fight at  Terminal 3 of Ninoy Aquino International Airport. This was after the newscaster took photos of Claudine Barretto, Santiago's wife at the time, who was berating an airline employee. The video of the incident was posted online and immediately went viral.

On his show Ben Tulfo Unfiltered in May, Ben criticized fellow broadcaster Mike Enriquez for excessive advertising of his own product (Mega sardines) on his own radio show. He later went on a full-blown tirade about his friend-turned-enemy.

Mon Tulfo embarrasses his own daughter on a national broadsheet

In an Inquirer article posted in February 2015, Mon alleged that "drugs were prevalent at the College of St. Benilde," writing in his column that "prohibited drugs are sold by some CSB students on and off campus. He added that he "learned about this from [his] daughter, a student of the school, and some of her classmates." Obviously, his child was not amused.

Raffy Tulfo Wanda Teo News Ben Tulfo Mon Tulfo Erwin Tulfo Tulfo Brothers
Your Guide to Thriving in This Strange New World
Staying
In? What to watch, what to eat, and where to shop from home
OR
Heading
Out? What you need to know to stay safe when heading out