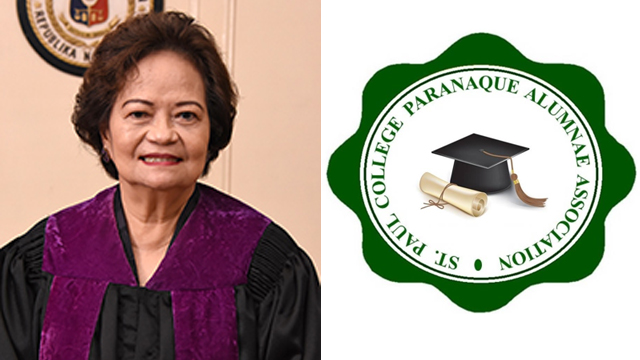 But the Internet's not having it.

(SPOT.ph) When Chief Justice Teresita de Castro was formally appointed to the highest judicial seat in the country on August 24, her entrance to the Supreme Court was met with controversy. Supporters (including presidential spokesperson Harry Roque) argue that her experience and seniority make her the "best choice" for the job; while critics question how she got that position. So when her high school alma mater—St. Paul College of Parañaque—congratulated her through the St. Paul College of Parañaque (SPCP) Alumnae Association's Facebook page, people online also had mixed views.

"Congratulations to our very own Paraqueno [sic] and SPCP Alumnae Hon. SC Chief Justice Teresita Leonardo-de Castro," says the post by the alumnae association on August 26. This was followed by a poster that lists down De Castro's educational and professional background, including graduating from St. Paul College of Parañaque in 1964.

A number of Paulinians expressed their disappointment towards the SPCP Alumnae Association. They cited values instilled in them by the Catholic institution, such as the Paulinian motto ("Caritas Christi Urget Nos" or "The Charity of Christ Urges Us") and a line from the Paulinian Song, which goes: "To proclaim Jesus Christ as the good news to all, in response to the need for total salvation from materialism, unjust structures, and apathy...," from the new chief justice’s integrity.

didn’t know newly appointed Chief Justice Teresita de Castro was a Paulinian, on behalf of Paulinians, we refuse to accept her as part of our identity, sorry we implied CLAYGO eh, we don’t want trash

Let it be known that I am resigning as a board member of St. Paul College of Parañaque Alumni Association. I refuse to be part of an organization that honors a person like Teresita De Castro. Her deeds does not embody the Paulinian values.#SPCPAA pic.twitter.com/ZJgJrklxi7

De Castro's supporters, on the other hand, defended the chief justice's position.

In January, another alumni association—that of the University of Santo Tomas—was also hounded with criticism after giving Assistant Sec. Esther Margaux "Mocha" Uson the Thomasian Alumni Award in Government Service.

St. Paul College Of Paranaque Chief Justice De Castro Duterte Supreme Court
Your Guide to Thriving in This Strange New World
Staying
In? What to watch, what to eat, and where to shop from home
OR
Heading
Out? What you need to know to stay safe when heading out