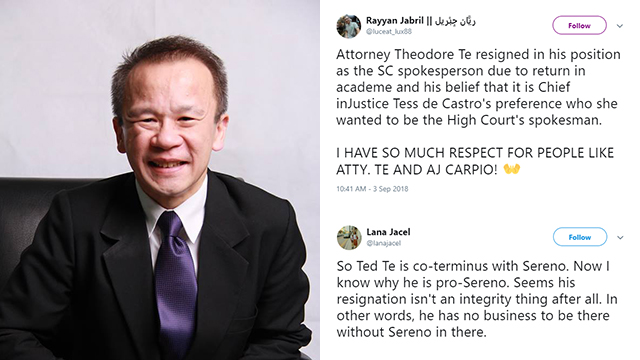 (SPOT.ph) Supreme Court spokesperson Theodore Te announced his courtesy resignation today, September 3. Supreme Court Chief Justice Teresita de Castro took her oath of office on Friday, August 31, and Te's position was co-terminus was that of former Chief Justice Maria Lourdes Sereno, who was ousted on May 11. In his resignation letter to Chief Justice De Castro dated August 29, Te expressed his intention to return to academic life in a full-time capacity—prior to his stint at the Supreme Court, he served as a professor at the University of the Philippines College of Law for 16 years. Te was an avid supporter of Sereno and controversially tweeted the statement "I Dissent" after her ousting.

Te's resignation was met with mixed reactions. Some lauded him for refusing to serve under Chief Justice De Castro, while others mocked his resignation as a cowardly way to save face. Check out the 10 reactions to today's Supreme Court development.

Attorney Theodore Te resigned in his position as the SC spokesperson due to return in academe and his belief that it is Chief inJustice Tess de Castro's preference who she wanted to be the High Court's spokesman.

I HAVE SO MUCH RESPECT FOR PEOPLE LIKE ATTY. TE AND AJ CARPIO! ????

good for @TedTe. a member of the bar with integrity and honor shouldn't serve a supreme court that has absolutely none.

Good. Your voice of "dissent", Atty Ted Te, is needed. Because we know you are an "ally" of truth, justice and the rule of law. https://t.co/4oEwYE9XzH

We're anticipating all the tweets he's likely to post now that he can be a bit more outspoken.

No room for dissent, apparently.

So Ted Te is co-terminus with Sereno. Now I know why he is pro-Sereno. Seems his resignation isn't an integrity thing after all. In other words, he has no business to be there without Sereno in there. https://t.co/1LOQS3ihdP

Er, that's how this usually works.

"I respectfully believe that I would be of greater value to the judiciary and the Court in the academic world at this time," - Ted Te
https://t.co/5AEzeExZbY

It was a good run. Congratulations to Ted Te! You have served the Supreme Court and the Republic well.

Good luck to the new spokesperson, whoever that might be.

Reactions Twitter Theodore Te Supreme Court
Your Guide to Thriving in This Strange New World
Staying
In? What to watch, what to eat, and where to shop from home
OR
Heading
Out? What you need to know to stay safe when heading out