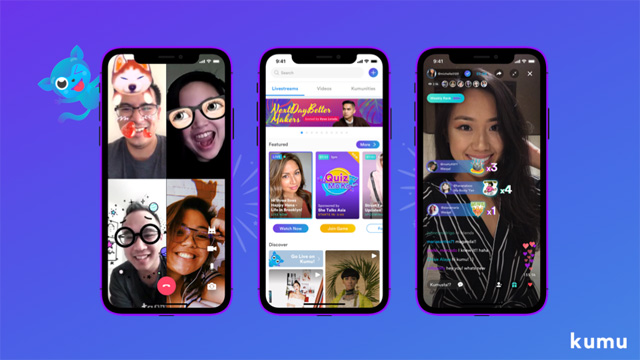 With Kumu, you can livestream, be part of engaging communities, and so much more.

(SPOT.ph) With millions of apps available in app stores, choosing what to actually download can be quite daunting, especially if they all sound like they do the same thing. It’s no wonder then that super-apps, or apps that provide a range of different features and services under one platform, have gained popularity in recent years. With super-apps, you just have to download one app to use and access several services like messaging, social media, and payment, to name a few. Asia alone has seen the growth of several successful country-specific super-apps, and it’s about time that the Philippines follows suit with homegrown app Kumu.

Released in February 2018, Kumu—a shorthand for the Pinoy greeting “Kumusta?”—aims to shake things up with their focus on growing a Filipino-grown creative content network. The app, which is available on both App Store and Google Play, wants to be “a platform for Filipino culture and communities to collaborate creatively” and to take part in building the country’s “foundations for a digital economy.” Founded by Roland Ros, Rexy Dorado, Andrew Pineda, and Clare Ros—Filipino entrepreneurs who have worked in fields of technology and social enterprise—Kumu serves as a “creative playground” for Pinoys all over the world.

Their group-chat feature, aptly called Kumunities, lets Kumu users all over the world start a conversion and connect with like-minded users to talk about various topics. You can find Kumunities on food and travel recommendations, groups that tackle interests like gaming, calligraphy, and makeup, and discussions on topics like dating, relationships, and living authentically.

Authenticity is something that Kumu puts a strong emphasis on, which goes hand in hand with their take on livestreaming. Apart from users being able to broadcast raw content in real time, they also have a roster of regular livestreamers that showcase the diversity of Pinoy culture, with the likes of graffiti artist DeeJae Pa'este, 2 Blocks from Burgos, the tandem of DJ Skratchmark and club owner Angelo Mendez, who host a series exploring Manila culture and nightlife; and BaiTV, a Cebuano channel that delivers Bisaya-focused news hosted by Malaya Macaraeg, among others. Plus, users won’t have to deal with pesky lag in livestream mode, as the livestream technology is optimized for low Internet connectivity, which allows livestreamers to connect to their audience in real time and vice versa.

The app’s soft launch on September 1 kickstarted with Quiz Mo Ko, their livestream trivia game show where participants stand a chance to win cash prizes. This month, Kumu also plans to roll out virtual gifting features. Both initiatives are concrete steps for Kumu to “catalyze a whole new digital economy that supports Filipino creativity and ingenuity.” The tipping and virtual gifting features allow anyone to earn money just by producing livestream content.

“The virtual gifting economy launched in China a few years ago and is about to overtake Chinese box office revenues,” shares Kumu chief eexcutive officer Roland Ros. “It has enabled everyone from students to street vendors to farmers who make thousands to millions of dollars each year by sharing their passion. We hope to have the same impact in the Philippines.”

In the future, Kumu plans to launch creator subscriptions, brand-driven shows, and integrated commerce, which will allow users to make money by showcasing brands and products that viewers can buy with a click of a button. “If we do this right, we can create a job-creation engine for the creative Filipino,” says Kumu’s head of strategy, Rexy Dorado.