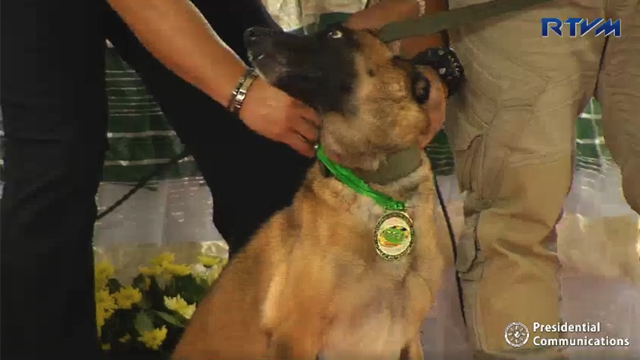 They're the heroes we need.

(SPOT.ph) The Philippine Drug Enforcement Agency proved to be just as loyal as man's best friend on September 10, when they recognized the accomplishments of 14 of the agency's drug sniffing dogs in an awarding ceremony held at Zemog K9 Training Center in Antipolo City. The dogs had figured in a controversial case last month, when the Philippine Drug Enforcement Agency (PDEA) discovered four magnetic lifters in a warehouse in Cavite. According to PDEA Director General Aaron Aquino, the lifters contained P6.8 billion worth of shabu and were similar to the four lifters seized by the Bureau of Customs at the Manila International Container Port on August 7. The K9 dogs had responded positively during their investigation, confirming that drugs had been present in the now-empty lifters.

Six-year-old Belgian Malinois Odel and his handler Ryan Collantes for this particular case received the Medalya ng Papuri, while other dogs were recognized for their contributions to the fight against illegal drugs. Lala and Tala, whose handlers are Michael Vista and Wilfredo Benito, respectively, were cited for detecting 355 kilos of shabu in the lifters seized on August 7. The other dogs who received recognition were Kiefer, Happy, Gringo, Twinkle, Lovi, Lorent, Bella, Annie, Ella, Kyro, and Olive. We can rest a little bit easier knowing someone's taking the drug war seriously.

K9 Dogs Animals Pdea
Your Guide to Thriving in This Strange New World
Staying
In? What to watch, what to eat, and where to shop from home
OR
Heading
Out? What you need to know to stay safe when heading out