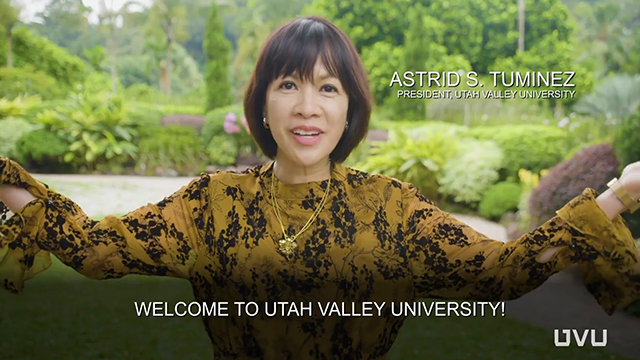 (SPOT.ph) It's hard enough to master a second language, let alone a third or fourth. But Dr. Astrid Tuminez might just inspire you to take a foreign language class soon. In a now-viral Facebook video dated September 17, the Filipino-born Tuminez, who is the first female president of Utah Valley University, can be seen greeting her students in six languages, namely: Spanish, English, Ilonggo, Filipino, Russian, and French!

The video starts with Dr. Tuminez welcoming her students and introducing herself in fluent Spanish. After briefly speaking in English, she switches to Ilonggo and recounts her humble origins growing up in the village of Pali in Iloilo. Tuminez later moved to Iloilo City with her family, where they lived in the slums. A group of Catholic nuns soon offered her and her siblings the chance to study at the Colegio del Sagrado Corazon de Jesus for free.

Tuminez remembers being a voracious reader at a young age, and spent much of her spare time reading in the library. In Filipino, she gave students this piece of advice: "What I want to say to all the students is work hard, study hard, and read a lot of books so you can finish what you set out to do."

After switching to Russian, Tuminez recalls how she graduated from Brigham Young University with a degree in Russian Literature and Russian Language. She would then go on to study Sovietology at Harvard University, and get her doctorate degree at the Massachusetts Institute of Technology. Finally, Tuminez wraps up the video by declaring her love for French food and poetry—in flawless French, of course.

Tuminez has worked all over the globe, in countries such as the United States, the Soviet Union, Hong Kong, Singapore, and the Philippines. Prior to being appointed as the president of Utah Valley University, she served as the Vice Dean of Research and Assistant Dean of Executive Education at the Lee Kuan Yew School of Public Policy at the National University of Singapore. She is also currently the Regional Director for Corporate, External, and Legal Affairs in Southeast Asia for Microsoft.

The Facebook video, which as of writing has amassed over 331,000 views and 5,600 shares, is nothing short of impressive. And one thing's for sure: Dr. Tuminez' success is proof of the merits of education and the value of working hard.

Utah Valley University Dr Astrid Tuminez Languages Viral Video Education
Your Guide to Thriving in This Strange New World
Staying
In? What to watch, what to eat, and where to shop from home
OR
Heading
Out? What you need to know to stay safe when heading out