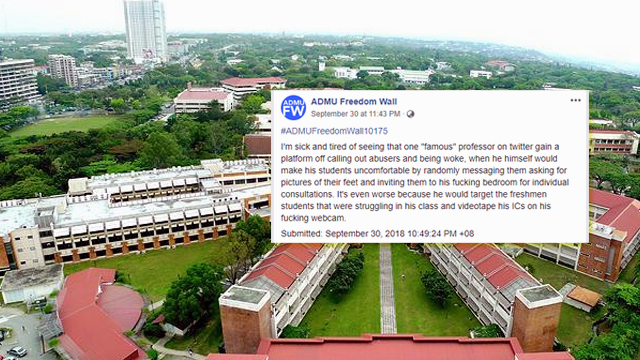 Is the #MeToo Movement (Finally) Breaking Into Philippine Academe?

Ateneo investigates allegations of misconduct by a professor.

(SPOT.ph) Social media, when used appropriately, can make a difference. This was proven by the Me Too movement, a hashtag-led campaign against sexual harassment and sexual assault that was initiated by American activist Tarana Burke in 2006, and then gained plenty of ground in 2017. Victims exposed the inappropriate actions of their assailants in 280 characters on Twitter with the hashtag #MeToo, and high-profile personalities all over Hollywood, the music industry, and politics were revealed as perpetrators.

Here in the Philippines, the movement seems to be creeping in on the academe as one anonymous student exposed a "famous professor on Twitter" who allegedly “[makes] his students uncomfortable by randomly messaging them asking for pictures of their feet and inviting them to his fucking bedroom for individual consultations.” The Facebook entry on the ADMU Freedom Wall was posted on September 30, 10:49 p.m., and has since been shared almost 300 times.

Though the name wasn’t indicated, students and even alumni seem to know who the post was about—as if it was an open secret that no one dared to reveal, until a platform was made available that could ensure anonymity. Who can blame them? Issues related to sexual harassment are often made the butt of jokes. (We’re looking at you, Malacañang.) Eventually, clues filled the comments section of the Facebook post and a name surfaced, identifying a member of the university's English Department faculty.

...they're asking the student/victim to trust the institution that they already feel has betrayed them.

To the admin/faculty doing this, I suggest your messaging should be geared towards gaining that trust back. Let them FEEL that they're safe, and that justice will come.

Suffice it to say, the post caught the attention of the entire Ateneo community (and even beyond). Professors and students are posting their messages of support, and discourse surrounding the prevalent rape culture in the country is more alive than ever. Another teacher's name has surfaced, that of a Philosophy professor who allegedly strokes his “students’ neck and shoulders” in class.

Now that “many sexual harassment cases against LS professors filed in the past have been resurfacing,” Sanggunian ng mga Paaralang Loyola ng Ateneo de Manila—the university's student government—is working on a "comprehensive case" that they're hoping to finalize "before the end of next week." Various agencies within the school system have already been notified, including the Office of the Vice President for the Loyola Schools and the Loyola Schools Human Resource Support Office.

"We understand how difficult it is to speak up against persons in power. We also understand how disappointing it is to realize that legendary professors turn out to be alleged sexual predators," the statement released by the organization in the evening of October 3 continued.

BREAKING: VPLS Maria Luz Vilches releases memo on sexual harassment complaints. Vilches assures the community that investigations will be underway, and that the University is committed to “eradicating all forms of sexual and gender-based violence” in the Ateneo. pic.twitter.com/U5PBig7OcI

The Office of the Vice President for the Loyola Schools, in a statement released on October 4, elevated the case to the University Committee on Decorum and Investigation. Vice President Maria Luz C. Vilches further added: "I empathize with and apologies to any and all victims who have experienced such unacceptable behavior, especially perpetrated by someone they trust."

In a post by former Ateneo professor Leloy Claudio, he points out the institution’s reputation as a “village school” where one often stands in support of another—sometimes to a fault. This, however, shouldn’t be misconstrued as an opportunity to sweep the issue under the rug.

Metoo Movement Ateneo De Manila University
Your Guide to Thriving in This Strange New World
Staying
In? What to watch, what to eat, and where to shop from home
OR
Heading
Out? What you need to know to stay safe when heading out