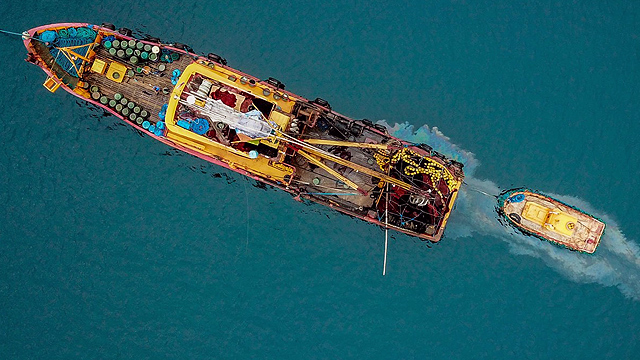 Is Coron Becoming Another "Cesspool"?

A drone camera captures what looks to be boats dumping oil around the islands' waters.

(SPOT.ph) President Rodrigo Duterte described Boracay as a "cesspool" in February, and it's easy to assume he was exaggerating—but the sad state of things just couldn't be denied and we all knew it was time to give this island a break. But the world-famous white-sand beach is reopening later this month after a government-imposed rehabilitation period and, so far, the results look promising.

Now, though, it seems that Coron in Palawan, another world-famous tourist destination, is at risk of a downward spiral as shown by drone shots of California-based photographer Sergei Tokmakov. A series of photographs shows what seem to be an everyday occurrence by the entrance of Kayangan Lake, where commercial fishing vessels and tourist boats dump their oil.

Tokmakov is on a vacation in one of the best islands in the world (Palawan, of course) "to produce a gorgeous photo book about it." Instead, his camera captured something else on the afternoon of October 8 and the morning of October 11. "Spilling at the entrance to Kayangan Lake continued this morning again. This is going on all over the Bay every single day, although the biggest dumps are in the hours before sunset," he narrated through the Facebook group Philippine Tourism Commission Group. The Coast Guard, according to him, joined him during the shoot and "witnessed the whole thing live." When Tokmakov asked them what the rainbow-colored traces (similar to when motorcycles and cars spill oil on wet roads) could be, the uniformed men said that "it just looks like water" and did not take any action.

On September 15, the photographer also captured on video a large fishing boat that's leaving behind a trail of oil 500 meters away from the Maquinit Hot Spring, which is another natural attraction in Coron. "The oil probably dissipated into the bay overnight again. Local authorities are denying the problem because they are worried that it would ruin Coron’s image. That’s why the oil spills in Coron Bay are so rampant and it’s so hard to catch violators," Tokmakov said in an earlier interview with Palawan Daily News.

Coron Island is currently in the running for inscription on the World Heritage List of the United Nations Educational, Scientific, and Cultural Organization. It was declared a National Reserve in 1967, and a Tourist Zone and Marine Reserve in 1978. The entire island province of Palawan was also declared a Mangrove Swamp Forest Reserve in 1981.