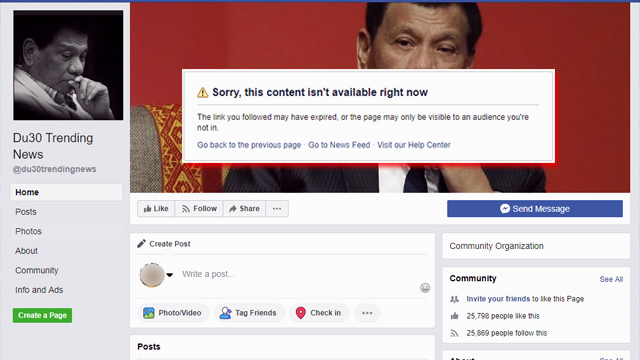 Is This Finally the End of Online Trolls?

(SPOT.ph) During the presidential campaign and election of Donald Trump in 2016, the phrase "fake news" became so popular that even if it doesn't make sense, we all know what it means. After all, how can news—considered a narration of true events—be fake? And so the use of quotation marks or even a hashtag (i.e. #FakeNews) is always necessary.

Here in the Philippines, Free Data for Facebook has been linked to the proliferation of online trolls that spread misleading or inaccurate "news" stories. It not only propelled unlikely presidential candidates to the top, but also justified the arrest of Sen. Leila de Lima, the administration's bloody "war on drugs," and even Martial Law in Mindanao. In an effort to curtail this problem, Facebook on October 22 announced that it has removed 95 Pages and 39 accounts in the Philippines "for violating our spam and authenticity policies by encouraging people to visit low quality websites that contain little substantive content and are full of disruptive ads."

In April, Facebook partnered with VERA Files and Rappler for the social-media giant's fact-checking program. VERA Files, which is headed by journalist Ellen Tordesillas, is the first Philippine fact-checking organization certified through the non-partisan International Fact-Checking Network at Poynter. These steps are part of Facebook's commitment "to keep bad content off [their] services."