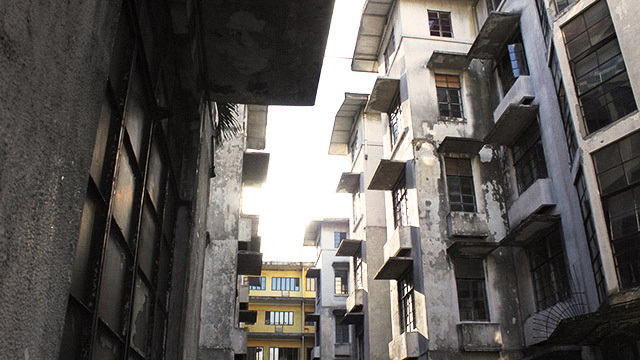 Tucked away in one of the Manila's streets is one of the most prime apartment buildings in the country.

Manila—once home to great family houses, social clubs, and art centers—now exists as a center for the city's hustle and bustle. During the day, the area mainly serves as a major hub for students and employees. At night, the numerous bars and clubs come alive.

When the Syquia Apartments were built in 1936, they were the tallest buildings in the city. They were the first to have a car garage and a passenger elevator. A poured concrete structure and design that made it sturdy as a fortress allowed the building to withstand the Battle of Manila, even acting as a shelter for army generals.

Adding to the building's mystique is the fact that not much is known of its history, architects, and original purpose. The Syquia family purchased the buildings a few years after it was built. It was then that the buildings became what we know now as the Syquia Apartments.

In the '70s and '80s, when Malate was the place to be, Syquia was the after-hours retreat for party-goers who danced the night away at Ernest Santiago's Coco Banana. Guests from all walks of life were welcome to join the artistic enclave. One-time resident, actress Cita Astals has even said, "It used to be like a giant dormitory, a lot of fun."

Apa Ongpin, the editor in chief of Asian Dragon, tells tales of the debauchery that went down in Syquia. In the 20-year period that he lived in the storied apartment building, up until today, Ongpin still considers Syquia his home. "The difference of [Syquia] is everybody in the building knew each other, it's a small number of units," he says.

Ongpin explains the draw of the building, "For some reason, the people that ended up there, all turned to be of like-minded dispositions. All, sort of, within a certain age bracket and all, sort of, believing in the same things. Friendly, slightly bohemian, there was a real artistic side to it. For that reason, people became friends, formed relationships with the other people in the building just because we were all there. That's really what Syquia was about."

The legendary parties that Syquia was known for, Ongpin recounts, started in the 2000s. "They were actually started by my wife, Ana Ysabel. I'd been living there since 1991, and she moved in with me in 2002. Initially, she was so different from the rest of the gang because she was much younger." He continues, "In a few months, she took over the place and she became the Queen of Syquia. Everybody would always want to have a drink with her. She became very popular. Then Dixie Mabanta suggested, it was really his idea, 'Let's have a Christmas party.'"

Syquia's Christmas parties started in 2003, with the first organized and conceptualized by Ongpin's wife, Ana. "The idea was that out of the 23 apartments, something like 12 would open. So, if you got invited, there would be tight security at the door, people couldn't just walk in and then go to any of the 12 apartments that were open. Each apartment would have a different theme: Marcus Schmidt and Richard Danao always had some kind of a gay disco theme, Ana and I would always serve food and have a full bar, and other, different themes."

"That was the first one, it was kind of small, like 150 people. It was a big success, we enjoyed it, and we partied until dawn. Some people wouldn't leave until dawn," he says.

"It was a good occasion to meet somebody else's friend. So, then we decided, for example, your friend Bill came to your house. After an hour, kick him out, say 'Bill, go to the other apartments. Meet everyone else.' Typically, every apartment, as the night wore on became a collection of people who had no idea who the owner of the apartment was and we're all meeting each other for the first time. That's why the Syquia parties became really legendary. A lot of people met and formed relationships because of the parties."

Talking about the end of the parties, Ongpin says, "At one point during the last party, there were around 500 people in the building at the same time. There were a lot of people there who shouldn't have been invited." He continues, "Stuff was stolen from the apartments. It was just not good." Sadly, after that incident, Syquia's annual parties were put to a halt.

In recent years, its most famous guest would have to be Anthony Bourdain. The American chef and television personality taped one of his episodes in Carlos Celdran's art space in North Syquia called The Living Room.

Since the South building was closed and sold off, North Syquia, its six-floor, 24-unit sibling, remains one of the last Art Deco buildings in Manila.

Chiqui Sy-Quia Mabanta, a Syquia descendant, restaurateur, and current resident shares how her grandfather came to acquire the buildings. "The government at that time expropriated his property because a railroad went through their house in Divisoria or something. [They] gave him a big amount of money because they built a railroad in Tutuban—that's my great-grandfather's house, in fact, the roof is still there. Then, with the money, they acquired a lot of properties."

Mabanta lists the endless benefits of living in North Syquia. "Most of us know each other. So there's a real feeling of community here. We party together. Real neighbors." She continues, "It's part of Old Manila, I have a view to Manila Bay. The apartments are high-ceiling, wooden floors, big windows. It's rare to find apartments like these nowadays because everything's so compact now."

"First of all, the units are large compared to regular apartments. The rent is not Makati rent. You get big spaces with a lot of character. Artists prefer places with character." She continues, "Some say there are art deco elements, but there's also Bauhaus elements because I think it's part of that era, the modernist era. I think it's a combination."

When asked about Syquia's notable tenants, Mabanta pointed to the South Syquia Apartments. "That's where Inno Sotto used to live, fashion designers," she said. "When you look at the character of the place, there's something deeper."

One of the last tenants of South Syquia, fashion designer Frederick Peralta shares, "[Living in Syquia] was fun and full of drama because of the famous characters."

"I fell in love with Syquia apartments, even before my shop was in Malate. I really aimed for a spot in the area, but unfortunately, there were no vacancies. I had a chance to stay there, [in the] late 2000s, and there were only a few tenants then. I had three units, one the ground floor then two on the second floor. The first floor was my office, and the second floor was my house."

He explains the unit's structure. "Each unit had two bedrooms. When you enter, you see the living room then the kitchen, and on each side were rooms." The units were built to maximize circulation air and light. "You didn't even need air conditioning." Peralta adds, "Windows were open most of the time which meant you could see through each other's units. You'd see other tenants' units filled with art, like life-size paintings. The interiors were nicely done."

The rent, Peralta reveals, was around P20,000 per unit—a steal when you get to live in a historical apartment with a priceless view and 100- to 200-square-meter floor space. The waitlist for a unit takes years, and each potential tenant is up for evaluation. He describes the application process: "If there's a vacancy, the association will interview you. Then, of course, you fill [out] forms."

Aside from the building, Peralta reminisces about being part of the Syquia community. "Everyone was friendly. People would say hi to each other when we passed units. Even if you didn't have frequent get-togethers, you're still friends. That's really different. Other places, if you go down they just look at you, almost saying 'I don't care about you.' It's really different. They're happy seeing and talking to other people."

Badidoy died in Syquia after being stabbed multiple times. Like any building, Syquia has been the location of other tragedies. Peralta recounts, "There was one floor that was closed off since a family was murdered in the '80s."

Almost four years after Peralta started his lease, news of Syquia's closure spread through the building. "When I was about to leave, I had to leave because they sold the place, I said, 'I leave this place with a happy feeling.' 'cause at least I was able to fulfill my dream. I always wanted to live there."

"There were a lot of stories from Syquia. There was something mysterious about the place. When you look at the character of the place, there's something deeper," said Peralta. "At night, when you get home late you'll really get goosebumps." But he affirms, "The place is really different. There's magic. I'm happy. At least, I was able to have the chance to stay there."