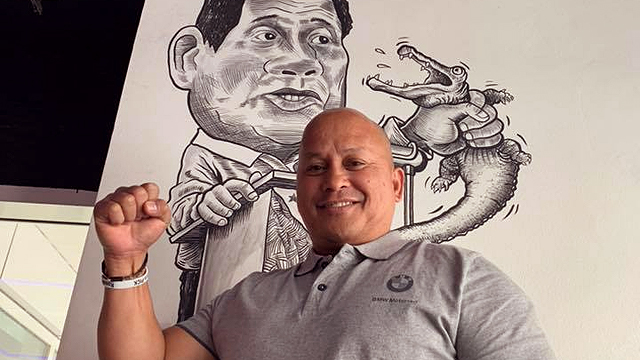 He's actually proud of it.

(SPOT.ph) "Seeing how ‘tokhang’ has permeated various levels of society, the message here is simple: Kapag tinotokhang ang ating mga karapatan, kailangang manlaban," writer Mark Angeles explained in his argument to make "tokhang" the word of the year. Tokhang, a portmanteau of "toktok" (knock) and "hangyo" (plea), is the name of the Philippine National Police's controversial anti-drug campaign, launched in 2016. It eventually became synonymous to the rising number of deaths on the streets due the so-called "war on drugs." And former Philippine National Police chief Ronaldo "Bato" Dela Rosa didn't seem to get the sarcasm when he posted about it on his Facebook page. "I did not foresee that the coined word 'tokhang' which was a product of my kalokohan/binuang would eventually become the word of the year," he said with pride.

Sawikaan: Salita ng Taon, a linguistic conference established in 2004 by the Filipinas Institute of Translation, is a campaign to enrich the Filipino language by declaring a word that's not only popular but also definitive of the cultural and political landscape in the Philippines for a year (or in this case, two). Anyone can nominate a word for Salita ng Taon—this can be a coined word, an appropriated term from a local or foreign language, a word whose meaning has changed over the years, or an obscure word that's becoming popular again. In the past, the chosen Salita ng Taon were: canvass (2004), jueteng/huweteng (2005), lobat (2006), miskol (2007), jejemon (2010), wangwang (2012), selfie (2014), and fotobam (2016).

During Sawikaan 2018: Pambansang Kumperensiya sa Salita ng Taon at the University of the Philippines - Diliman on October 26, Angeles dedicated the declaration of "tokhang" as the word of the year to Filipinos who chose to fight against human rights violations. President Rodrigo Duterte himself referred to innocent people and children who have been killed as "collateral damage." Komisyon sa Wikang Filipino chair Virgilio Almario said that the inclusion of the term to mainstream discourse meant that “people were able to digest the word and the violence that came with it.” He also added that it has become a tragic part of our national consciousness (“talagang napakasamang bahagi ng karanasan ng sambayanan”). The other words shortlisted for Salita ng Taon were: Dengvaxia, DDS, dilawan, fake news, federalismo, foodie, quo warranto, resibo, TRAIN, and troll.

Maybe Bato should have listened to the writer's presentation first.