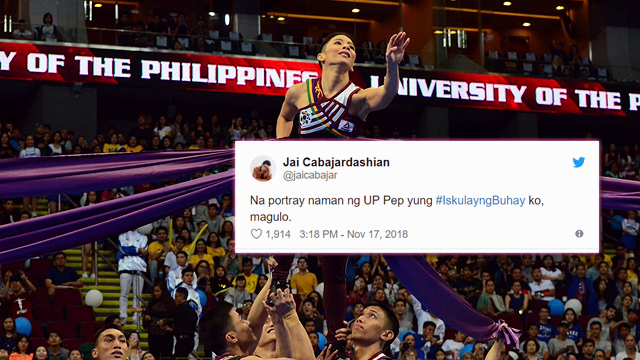 The Funniest Tweets About The 2018 UAAP Cheerdance Competition

(SPOT.ph) The UAAP Cheerdance Competition 2018 just wrapped up, and, to no one's surprise, the National University reclaimed the top prize, followed by the Far Eastern University and Adamson University. Of course, commenting on the show and all the performances, plus inter-university trash talking have become a beloved annual tradition, and Twitter did not disappoint.

Viewers at home took note of the camera angles used this year.

The dip in the amount of cash prizes did not escape people’s notice either.

The University of the East's routine was pintados-inspired. But Twitter user @arnoldorina had a different take.

The University of the Philippines drew upon the traditional sablay, and their theme was #IskulayngBuhay. Reactions were mixed.

The National University Pep Squad's flawless performance showed that they were serious about  gunning for the top this year.

In the biggest cheerdance competition surprise, the Ateneo Blue Babble Battalion turned out a routine that was pretty cute and clean "for the first time in forever" indeed, breaking what seemed to be a years-long curse.

And the memes, oh god, the memes.

Honestly, we're all the true winners here with all this comedy gold. See you again at next year's cheerdance competition, Twitter! Can't wait to see what you'll come up with.