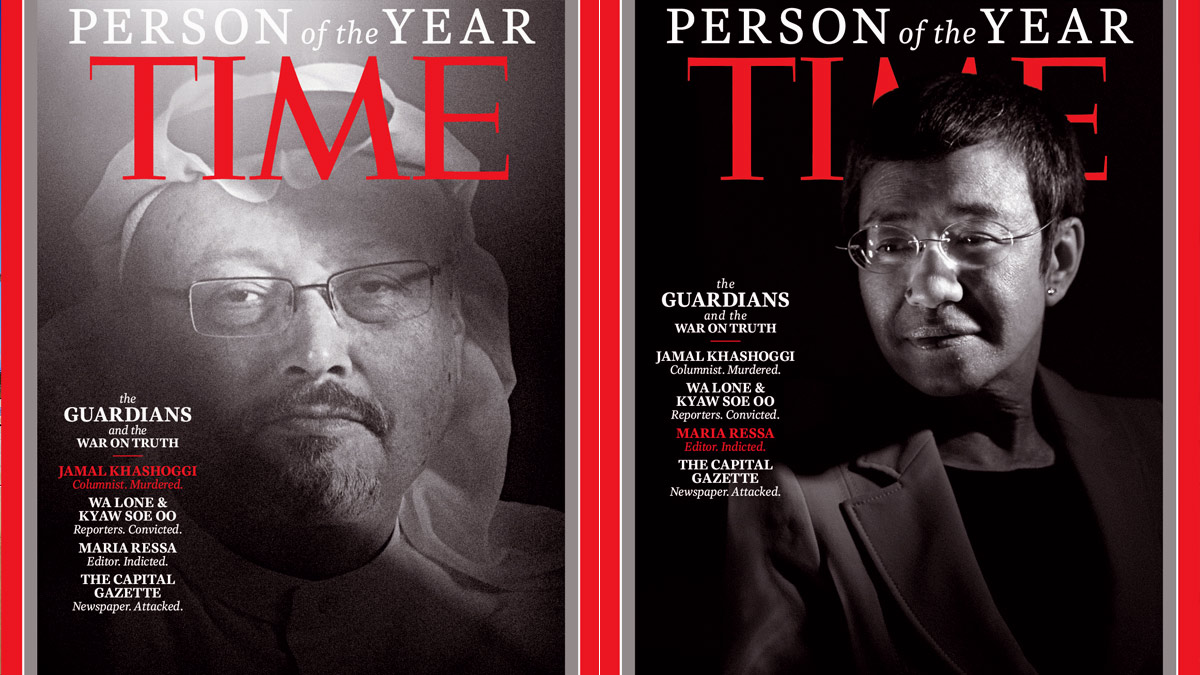 Journalists Are Heroes in Time Magazine's Person of the Year

They've been dubbed "The Guardians."

(SPOT.ph) Novelist Albert Camus couldn't have been more wrong when he said that "the purpose of a writer is to keep civilization from destroying itself." For Time Magazine, writers and journalists are recognized as "guardians" in the ongoing "war on truth" and featured in the 2018 edition of "Person of the Year."

The New York-based magazine has four different covers featuring journalists who were chosen "for taking great risks in pursuit of greater truths, for the imperfect but essential quest for facts, for speaking up and for speaking out." They faced dangerous truths for doing their jobs, which is to inform their people of the truth.

"By featuring four distinct covers, we were able to amplify different voices from around the world," said Time creative director D.W. Pine.

They include Jamal Khashoggi, who disappeared after entering a Saudi consulate in Istanbul. He was known as a vocal critic of Saudi Arabian leadership. Authorities say that he was killed inside the building by rogue officers, but many believe that he was put down on the orders of Saudi Crown Prince Mohammed bin Salman.

The editorial staff of Maryland-based Capital Gazette are also recognized. On July 28, a gunman walked into their office and killed five staffers. Knowing that the show must go on—or in this case, that the paper still needs to come out the next morning, they set up camp in their building's car park on the same day of the incident. It was found that the suspect had a longstanding grudge against the newspaper.

Wives of Reuters journalists Wa Lone and Kyaw Soe Oo are also featured on the cover. The two writers were sentenced to seven years in jail after they investigated the murders of 10 Rohingya men by the army in Myanmar.

Maria Ressa, founder of Manila-based news site Rappler, is also named "Person of the Year." The news site investigated and published in 2017 a story on pro-Duterte online trolls, which Malacañang denied. In January, Rappler's license was revoked; while in November, Ressa was accused of tax evasion.

Time Magazine Maria Ressa Person Of The Year Wa Lone Kyaw Soe Oo Capital Gazette Jamal Khashoggi
Your Guide to Thriving in This Strange New World
Staying
In? What to watch, what to eat, and where to shop from home
OR
Heading
Out? What you need to know to stay safe when heading out