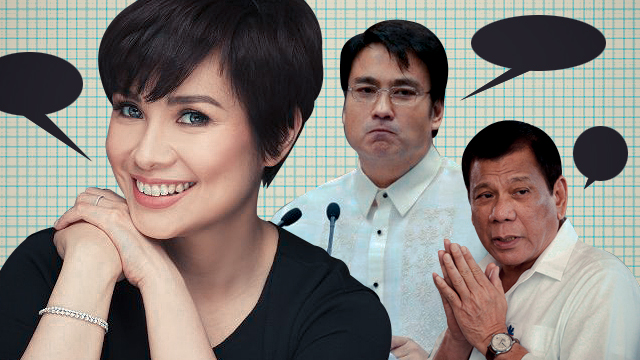 Quotes of the Year: 10 Unforgettable Statements That Defined 2018

(SPOT.ph) 2018 was pretty wild, so it’s good that we have the previous years that helped toughen us enough to cope with all the craziness. But that doesn’t mean we’re totally immune to anything our public officials and celebrities say or do.

Here are some of the quotes this year that raised our hackles and made us laugh at their sheer ridiculousness, plus a couple of bright spots, too.

"Serve me that bukbok rice, and I will eat it."— Agriculture Secretary Emmanuel Piñol trying to persuade Filipinos that weevil-infested rice imports from Thailand are fine

Nobody bought it, and we all cringed when he actually ate some on TV.

"For example, 'yong sinabi ko na binibiro lang, hinipuan na gano'n, will they be liable? You (Hontiveros) said yes, the answer I think is no."
—Senator Tito Sotto, making light of a serious issue again, this time, it’s sexual harassment in the streets

At this point, are we even surprised that he says things like this?

Hands up if you want your boss to be as kind and gentle as he is.

"Very early on, even before he ran for president, my father was an immensely successful lawyer and he also had invested in many many things that turned out to be extremely profitable because he had so much foresight."
—Imee Marcos explaining away her family’s wealth

Damn, we knew being a lawyer could net you a high salary and that investing could give you some good returns, but we didn’t know it could get you up to U.S. $10 billion.

"If I want to joke, I will joke. Ngayon, kung maniwala kayo, e g*** kayo."
—President Duterte after he was called out for saying he uses marijuana despite the ongoing war on drugs

We suppose it’s our fault for taking the words of the highest official in the land seriously.

That wasn’t a particularly tense and serious situation they were in when he said that though…?

And he wants to make it part of his legislative agenda, too. Philippine politics, ladies and gentlemen.

"You won’t be everyone’s cup of tea, and not everyone will be yours. Taste is a subjective thing. Just because you don’t like something doesn’t mean it’s bad."
—Lea Salonga taking the high road after a years-old statement of her seemingly supporting the Marcoses surfaced

True, but we should also remember that corruption and extra-judicial killings shouldn’t be anyone’s cup of tea.

"I always add sugar and creamer but never ad hominem. Charot!"
—Ethel Booba responding to a question on how she likes her mocha and taking the opportunity for a dig at Mocha Uson

We’re already looking forward to her zingers and tongue-in-cheek political commentaries in 2019.

"Where’d it go? Oh, it fell. Ipis. Oh, a cockroach? What is this? Oh, it’s a cricket."
—Liza Soberano demonstrating unparalleled chill despite handling an insect that makes most people scream at its very sight

We could all benefit from her example especially in these trying times.

Quotes Politics Quotes Celebrity Quotes Metro Manila News
Your Guide to Thriving in This Strange New World
Staying
In? What to watch, what to eat, and where to shop from home
OR
Heading
Out? What you need to know to stay safe when heading out