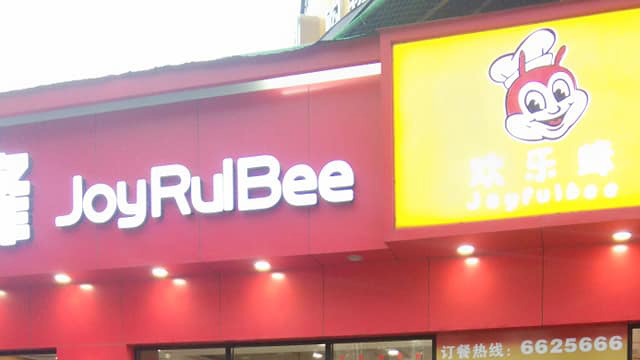 A Jollibee Knockoff Has Been Spotted in China

The real Jollibee isn't taking this sitting down.

(SPOT.ph) It’s always a thrill to see a familiar Filipino brand or restaurant in a foreign location, but a Filipino couple exploring Guanxi Province, China, were more unpleasantly surprised than excited when they saw a very familiar face serving as the mascot of a totally unknown restaurant. On January 22, pictures and a video taken by Christopher Guzman with his wife Jenny were posted on Facebook, showing a Jollibee knockoff restaurant called JoyRulBee.

The restaurant’s exterior and primarily red interiors do look like a copy of Jollibee, probably enough to make one do a double-take when they see it. A video posted by Guzman showed that JoyRulBee also serves burgers, sundaes, and fried chicken, albeit a whole one, and its menu has a few differences from the original, such as chicken sandwiches and a roast chicken.

Guzman stated in his video that this was the first time they’d seen a Jollibee knockoff in their 10 years of living in and traveling to different parts of China. Except for JoyRulBee, there haven’t been any other previous reports of other Jollibee copycats elsewhere in the world, save for a restaurant called Happy V in Singapore, which supposedly gave Filipinos craving Jollibee something to tide them over until they could have the real thing.

Reactions to the Jollibee copycat have been hilarious and interesting, with some saying they think JoyRulBee is just the real Jollibee masquerading as another brand or that the name is a way to adapt the original name to a foreign context, and others joking about moving to China because the knockoff is serving whole fried chicken. But people are generally rallying behind the original Jollibee and seeing JoyRulBee as an affront to the beloved brand.

According to Jollibee Foods Corp., they were already aware of the Chinese restaurant’s existence before it was featured in the viral post and that they’ve already initiated steps to take legal action against the restaurant, which is clearly infringing on Jollibee’s trademark. Time to update that meme where Jollibee is beating up a competitor with one of Jollibee beating up the copycat, maybe?

Jollibee Trademark Infringement China Joyrulbee
Your Guide to Thriving in This Strange New World
Staying
In? What to watch, what to eat, and where to shop from home
OR
Heading
Out? What you need to know to stay safe when heading out