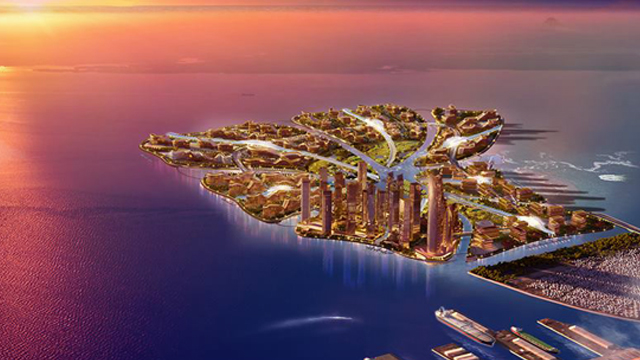 The proposed reclamation project has been met with mixed reactions.

(SPOT.ph) There have been previous attempts to restore Manila Bay to its former glory, but they never quite resulted in significant changes—at least, until now. The Department of Environment and Natural Resources recently started to enforce stricter measures to rehabilitate the area, resulting in orders calling for the closure of establishments like the Manila Zoo and a shut-down of facilities at some well-loved restaurants. The success of the cleanup may just be the first step in the development of the world's biggest "smart city," dubbed the New Manila Bay City of Pearl.

Talks of the proposed city's development began as early as 2017, and a memorandum of agreement to carry out the project was signed by Manila mayor Joseph Estrada and Pasay City mayor Antonino Calixto in November 2018. The proposal for New Manila Bay City of Pearl was developed by a consortium led by local company UAA Kinming Group Development Corp., in partnership with a global mix of partners from China, Southeast Asia, Europe, and other regions. It promises a city featuring a central business district, along with residential, retail, entertainment, medical, education, sports, and other facitlities.

The 407-hectare project would, however, require some of Manila Bay's waters to be converted to land, which is why the reclamation project has drawn flak from green groups in the Philippines.

In a post on their Facebook page, the Earth Island Insitute Philippines warned of the negative impacts of reclamation projects. "Garbage pollution is not the only [thing] that [is] destroying the coast of the city. Reclamation, which is an irreversible project, poses a greater threat to the environment and the livelihood of thousands of [fisherfolk] living in the coastal communities of Mega Manila."

In response, Presidential Spokesperson Salvador Panelo did not deny that any reclamation would be done, but instead said that reclamation projects would lead to more jobs and more income, thereby improving the the country's economy, according to a report in The Philippine Star.

The City of Pearl is said to have been designed with the goal to make it a smart and sustainable city, utilizing green initiatives and features that generate renewable energy. It's expected to be completed by 2035.

Manila Bay Smart City New Manila Bay City Of Pearl
Your Guide to Thriving in This Strange New World
Staying
In? What to watch, what to eat, and where to shop from home
OR
Heading
Out? What you need to know to stay safe when heading out