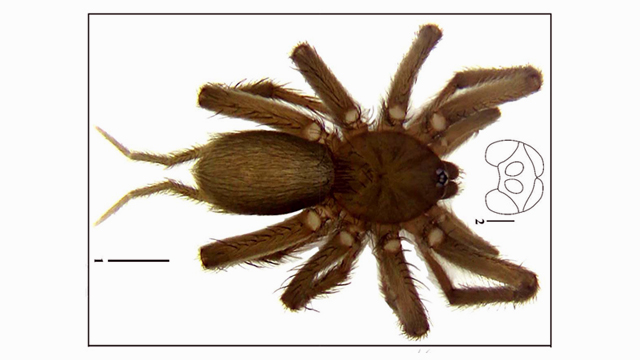 This Newly Discovered Spider Species Is Named After Urduja

It was found at the entrance of a limestone cave in Pangasinan.

(SPOT.ph) Before the age of mobile games and apps, kids were often left to their own devices (pun intended) to come up with ways to entertain themselves. A popular game in the countryside included capturing small spiders called babagwa and letting them fight in an empty matchbox. Of course, kids could only use commonly found household spiders—nothing like the Masteria urdujae, a newly discovered spider species found in a limestone cave in Pangasinan, named after legendary warrior-princess Urduja.

A paper co-authored by Dr. Aimee Lynn B. Dupo, a University of the Philippines Los Baños faculty member and Museum of Natural History curator for spiders and moths, and Joseph B. Rasalan, a University of the Philippines graduate student, documents the discovery of the Masteria urdujae. It was found under rock debris at the newly explored Pelpel cave. Students discovered the species in a cave assessment activity in 2017. Measuring only four millimeters, it's recorded as the smallest masteriine species in the Indomalayan region.

According to the paper, it is also the first masteriine species from Northern Luzon, and the third in the Philippines. This spider has six eyes, with a pear-shaped bulb, and carapace "with long brown hair on its on interstitial ridges."

"We think it is just apt that we name [the spider] after a local figure from Pangasinan. It is part of our goal to raise awareness, hopefully, for [the community's] conservation of the species," Rasalan said in an Inquirer report.

Although it's not quite clear whether Urduja is fictional or not, the literature about her describes her as a fearless warrior and leader of Tawalisi, now known as Pangasinan.

The Philippines, which is identified to be a megadiverse country, is home to a number of endemic animal and plant species. However, some of them have been included in the list of endangered animals, like the tamaraw and tawilis.

Spider New Species Urduja Philippine Biodiversity
Your Guide to Thriving in This Strange New World
Staying
In? What to watch, what to eat, and where to shop from home
OR
Heading
Out? What you need to know to stay safe when heading out