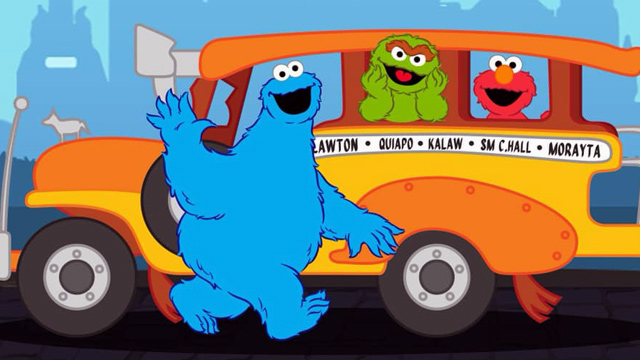 Expect to see more of them in the next three years!

(SPOT.ph) Anyone who had a TV growing up has probably watched an episode or two of the American educational show Sesame Street.  If you were a big fan of the show, chances are you're familiar with the characters and maybe you even picked up lessons from some episodes.

For the people behind the well-loved educational show, teaching kids goes beyond the TV. Sesame Workshop, the non-profit organization behind the show just partnered with the Metropolitan Manila Development Authority to launch a road safety program for children in Manila.

The three-year partnership between the Metropolitan Manila Development Authority (MMDA) and Sesame Workshop aims to help educate kids on road safety with Elmo, Cookie Monster, Big Bird, and other Sesame Street characters to make learning fun for them.

"We are very excited about this initiative, which focuses on children, the future citizens of Metro Manila. It is everybody's responsibility to teach kids respect for the rules and compassion for the community, and we at the MMDA are proud to be with Sesame Workshop at the frontline of this endeavor," MMDA Chairman Danny Lim says in a statement.

The partnership was signed alongside the launch of the MMDA x Sesame Street Wall Art initiative at the Children's Road Safety Park in Malate, Manila City on March 18. The park features miniature street-related structures and signs that will help familiarize children with road safety.

Through this collaboration with Sesame Workshop, the MMDA "hopes to mount a traveling road safety park of similar nature," which will be taken to different cities around Metro Manila. They're also planning to create more art along major thoroughfares, hold a family fun run, launch the MMDA Children's Handbook, and a put up a "children's exposition," which is "essentially a cross between an educational theme park and experiential museum."

The partnership comes as Sesame Workshop celebrates the 50th anniversary of Sesame Street. In 2012, the organization also partnered with the Asian Development Bank - United Nations for a campaign on road safety.

Mmda Sesame Street Road Safety Children's Road Safety
Your Guide to Thriving in This Strange New World
Staying
In? What to watch, what to eat, and where to shop from home
OR
Heading
Out? What you need to know to stay safe when heading out