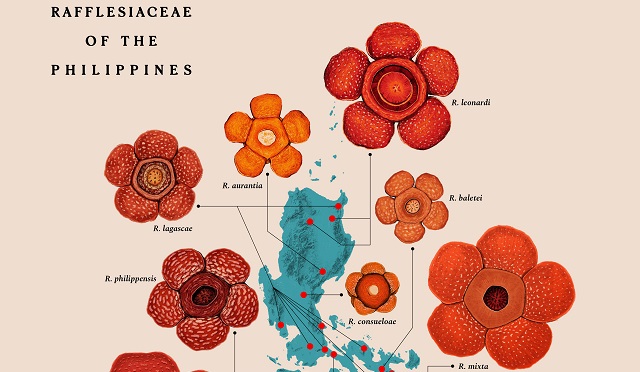 This Rafflesia Map Shows a Lesser-Known Side of the Philippines

We have 13 endemic species of the "corpse flower" right here.

(SPOT.ph) Flowers are known for their beauty and fragrant aroma, but not the Rafflesia—this one smells like rotten flesh. The world's largest flower is now an endangered species, and few remain in the wilds of Indonesia, Malaysia, Borneo, Sumatra, Thailand, and yup, the Philippines! But it seems more people are paying (necessary) attention to the endangered corpse flower, as an illustrated map of the 13 endemic species we have in the country has been making the rounds online. And while knowledge is always free, the artist behind it, Raxenne Dosher Maniquiz, has made her illustrated version of a map originally done by researchers even more accessible—hopefully allowing more people to realize just how rich our country is when it comes to biodiversity.

Maniquiz first stumbled upon the original map in a research paper on the status of the Philippine Rafflesia by Danilo Balete, Julie Barcelona, and Peter Pelser published in 2009. The map was recently updated by the researchers in 2018.

"I came across [the map] while I was doing research on endemic flowers for a [Philippine] Flora Map I've been working on since last December," says Maniquiz in an online exchange with SPOT.ph. "At the time I was surprised that we actually had many different ones here," she adds, citing that while she was familiar with the famous Rafflesia arnoldi—the large, red one found in Borneo—and the  Rafflesia schadenbergiana in Mindanao, "There were other colors pa pala and there were even smaller sizes. One could fit inside an A5 paper." BTW, that's still pretty large for a single bloom at around six inches by eight inches; a flower of the Rafflesia arnoldii holds the record for a diameter of three feet and six inches.

"I think a lot of people didn't know that we had that many," says Maniquiz, adding that, "[the] Philippines is considered a megadiverse country because of the high level of endemism we have in our islands. There are 18 megadiverse countries all in all. We're also one of the centers of Rafflesia diversity."

Maniquiz's illustrated version of the map brings this fact to the fore. "I'm giving it away for free because this is a modified version of a map that is used for educational and conservation purposes," she explains. The map is a cool refresher on the awesome biodiversity our country enjoys, Rafflesia "corpse flowers" included.

The illustrated version of Maniquiz comes in two versions: a soft beige and sleek black, and you can download them both here. The artist asks that you respect the original work done by the researchers though, so please just share it for educational purposes, or you know, just 'cause it's a great reminder of how cool our country is!