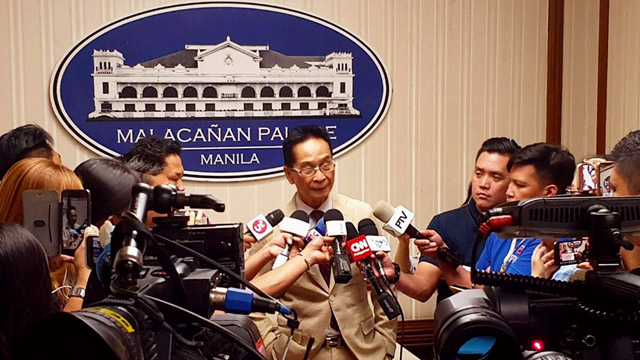 Friendly Reminder From Panelo: Feel Free to Criticize the Government

The Palace finds it "curious" that people hesitate to broadcast their feelings.

(SPOT.ph) Can a democracy exist without freedom of speech? Well, at the very least, it's right there in our Constitution, which, in Article III, Section 4 states "no law shall be passed abridging the freedom of speech, of expression, or of the press, or the right of the people peaceably to assemble and petition the government for redress of grievances." So we'd like to take this chance to highlight a very friendly—and hopefully unironic—reminder from Presidential Spokesperson Salvador Panelo: "We reiterate our call to all Filipinos not to hesitate in articulating their thoughts on government policies, critical or otherwise."

This statement, issued on August 3, comes after the results of a Social Weather Stations survey showed that 59% of respondents agree that "I can say anything I want, openly and without fear, even if it is against the administration." According to Panelo, "Filipinos are not afraid to criticize. Look at social media. The criticisms of those who do not like him (Duterte) are relentless. That's our nature." But 51% of respondents agreed "It is dangerous to print or broadcast anything critical of the administration, even if it is the truth." A result which, according to Panelo, the Palace found to be "curious."

"The president respects criticisms as long as the same is not baseless, unfounded or false. He even urges the people, including writers and reporters, to freely express whatever sentiments they have," Panelo said. President Rodrigo Duterte currently has a ban on news site Rappler from covering any of his events.

Sedition charges were also filed on July 18 against Vice President Leni Robredo, Senators Risa Hontiveros and Leila de Lima, Atty. Chel Diokno—all known critics of the Duterte administration—and at least 30 more respondents, by the Philippine National Police for their supposed involvement in the "Bikoy" videos that tied the First Family to the illegal drugs trade.

The De La Salle Brothers of the Philippines issued a statement on August 2 in defense of their brothers, former education secretary Bro. Armin Luistro and human rights lawyer Diokno, who are implicated in the charges. The statement, signed by 15 of the institution's top officials, called on the Duterte administration to "end the filing of charges against its perceived critics and instead perform its duty to protect the democratic space for dissent, grievances, and critical perspectives."

Main image from the Office of the Presidential Spokesperson Facebook Page.