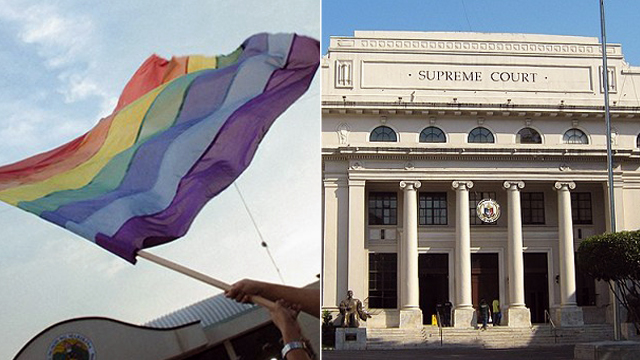 According to them, marriage equality is a matter for Congress to decide.

(SPOT.ph) The Supreme Court has junked a petition that sought to allow marriage equality in the Philippines. The court decided in a vote on September 3 to dismiss the petition filed by lawyer Jesus Nicardo Falcis III on the grounds of his lack of legal standing, thereby "violating the principle of hierarchy of courts, and failing to raise an actual, justiciable controversy," in an official press statement.

The court also added that although they realize that members of the LGBTQ+ community face discrimination daily and recognize their struggle for equality, "official recognition of their partnerships may, for now, be a matter that should be addressed to Congress."

The court's decision did note that "From its plain text, the Constitution does not define, or restrict, marriage on the basis of sex, gender, sexual orientation, or gender identity or expression." But the statement emphasized that the court can only make decisions on "issues propelled by actual controversies."

Falcis and his co-counsels Darwin Angeles, Keisha Trina Guangko, and Christopher Maranan are also being held liable for indirect contempt by the Supreme Court. "[t]o forget [the bare rudiments of court procedure and decorum] —or worse, to purport to know them, but really, only to exploit them by way of propaganda—and then, to jump headlong into the taxing endeavor of constitutional litigation is a contemptuous betrayal of the high standards of the legal profession," said the decision. In 2018, Falcis was berated by the court for wearing, "a casual jacket, cropped jeans, and loafers without socks," during a preliminary conference.

The dismissal comes four years after the petition was filed in October 2015. Falcis sought to have Articles 1 and 2 of the Family Code of the Philippines declared unconstitutional to allow for marriage equality.